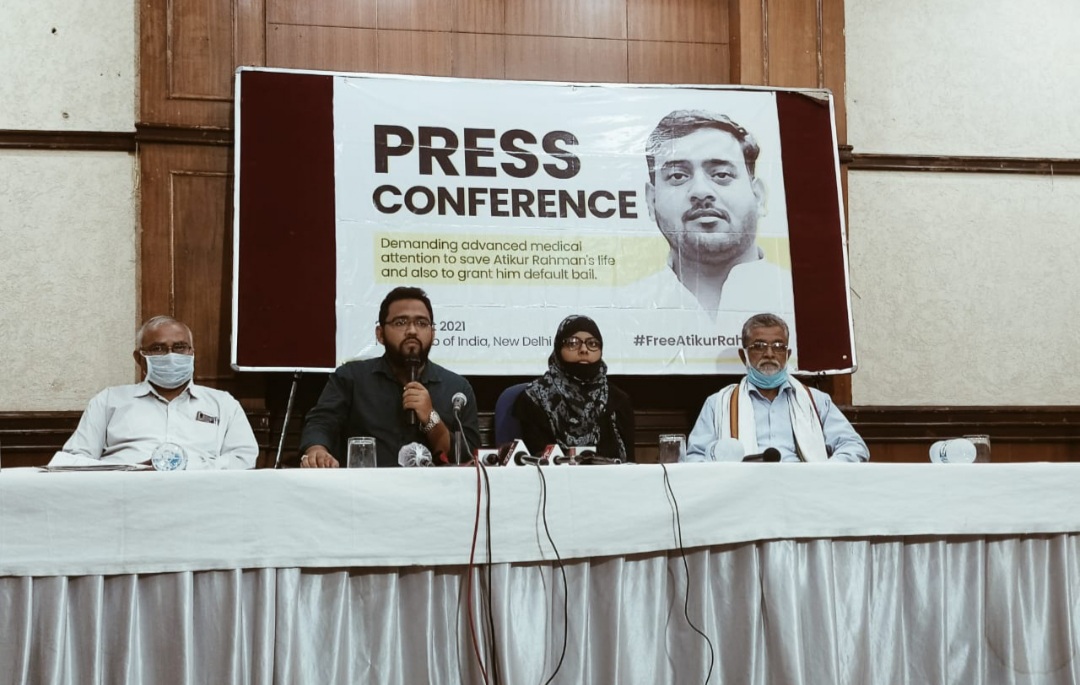 New Delhi  : On August 27, Hathras detainee Atikur Rahman’s family expressed their concern about Atikur’s health in the press meet gathered at Press Club of India, New Delhi. He has been admitted to the jail hospital for the past four days.

Atikur’s spouse Sanjida Rahman said that the prison authorities are calling his ailment as ‘seasonal fever’, neglecting his heart disease.

“The arrest was made just before one month in which his heart surgery was scheduled. Then onwards he wasn’t provided any medical assistance. We have been saving Rs 2 lakh for the past two years for the surgery. This negligence could be fatal to his life”, Sanjida said.

During the press conference, Ashwan Sadiq P, National general secretary Campus Front of India said that the arrest was made as a purview of political vendetta.
“He was in the forefront of the anti-CAA movement. His stern interventions against the police atrocities in his locality also had made him a target of the authoritarian rulers,” he said.

Ashwan said that the ‘Hathras Conspiracy’ case was a counterfeit story cooked up to silence dissent.

“Now shoving him towards the same fate as that of Ft. Stan Swami’s out of political vengeance cannot be watched inertly.”

Ashwan said that the judiciary must duly consider his petition seeking advanced medical care and grant him default bail for his treatment, he demanded.

Atikur’s lawyer Madhuvan Dutt Chathurvedi told the media. That guarantee to life and liberty is one of the pious provisions of our Constitution.

“No one has the authority to deny the rights of a person even if he is convicted. Atikur Rahman is an undertail prisoner. We have approached the court four times citing his medical condition, all of them were heard without due gravity and hence were turned down, Chathurvedi said.

Rahman, 27, was arrested last year by Uttar Pradesh Police while on his way to Hathras following the gangrape and subsequent death of a Dalit girl. He was a member of Campus Front of India, a student organisation. Rahman and Kappan were charged under the UAPA, a tough anti-terror law enacted by the Uttar Pradesh government. Civil society has, many a times, slammed their arrest and invocation of UAPA against them.

Rahman has had heart problems since he was seven years old.

Before his arrest last year, Rahman was scheduled to have heart surgery at the AIIMS in Delhi, according to his brother Mateen.
Earlier, rights body NCHRO has also warned about his deteriorating health.

“We witnessed the passing away of Father Stan Swamy in custody. Now, Atiq Ur Rahman, a student leader suffering from a serious heart condition and facing negligence even in the midst of a life-threatening disease, reveals failure of our democratic society as well as the rule of law,” said the NCHRO in a statement.

Father Stan Swamy, a tribal rights activist who had been in prison since October 2020, died while incarcerated. He had Parkinson’s disease and had repeatedly requested bail on medical grounds, which had been denied.