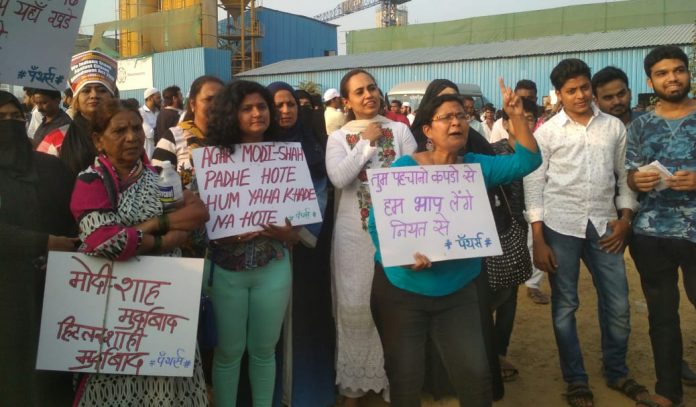 New Delhi, Dec 31 :While  the ruling BJP-led NDA government at the Centre launched a social media campaign to support the Citizenship Amendment Act (CAA), a counter campaign #IndiaDoesNotSupportCAA has overtaken it on social media and Twitter trends.

#IndiaDoesNotSupportCAA has been the top Twitter trend since Monday night and was among the top four worldwide trends. It has been trending for most of Tuesday morning as the number one trend In India.

It is the top trending thread on Twitter on Tuesday morning with 4.44 lakh tweets.

#IndiaDoesNotSupportCAA is a counter campaign launched to the #IndiaSupportsCAA campaign launched by the BJP on Monday with top government functionaries participating which included a video by spiritual guru, Sadhguru Jaggi Vasudev.

#IndiaDoesNotSupportCAA trend has arguments against the CAA, protests across the country and even a picture from a marriage in Kerala where there is a placard opposing the BJP and the CAA.

The supporters of this campaign are also celebrating the fact that it has overtaken #IndiaSupportsCAA as the top trend despite the support of Prime Minister, Home Minister, other ruling party supporters and Sadhguru.

Another netizen noted that #IndiaDoesNotSupportCAA has 3.33 lakh tweets compared to 1.22 lakh tweets for #IndiaSupportsCAA and the pro-government campaign has been left behind.

Prime Minister Narendra Modi on Monday took to Twitter to launch an outreach campaign over Citizenship Amendment Act with the hashtag #IndiaSupportsCAA.

Prime Minister”s official website tweeted, the CAA “is about giving citizenship to persecuted refugees and not about taking away anyone”s citizenship”.

At about the same time PM Modi tweeted in which he shared a video of Sadhguru Jaggi Vasudev, a saint and yogi who provided a “lucid explanation of aspects relating to CAA” and “calls out the misinformation by vested interest groups”.

This comes as a part of BJP”s campaign in support of the Citizenship (Amendment) Act 2019. This move aims at spreading awareness that has erupted against the legislation across the country.

Following the trend initiated by the Prime Minister, Union Minister Piyush Goyal tweeted: “In a most coherent &amp; eloquent manner, @SadhguruJV explains the nuances of the CAA &amp; calls out the misinformation being spread. He highlights the Indian ethos of humanity, inclusiveness &amp; compassion for those who have suffered atrocities #IndiaSupportsCAA.”

While Union Home Minister Amit Shah retweeted PM”s post, after the launch, the hashtag was trending on Twitter in India with 414K tweets.

CAA Protest in Patna : The body of missing teenager recovered after 10 days