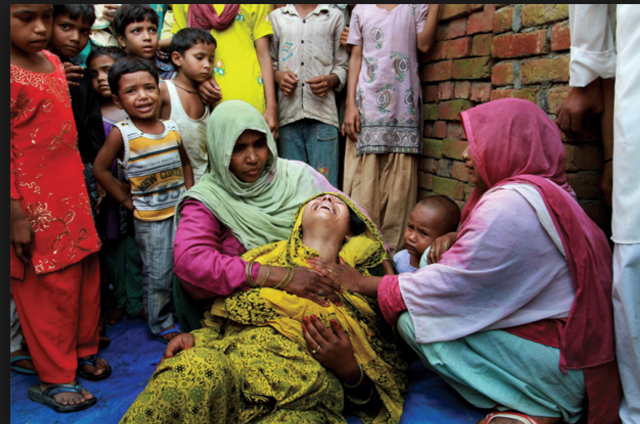 In a famous Hadeeth narrated by Anas Ibn Malik , Ibn ‘Abbas reported that the Prophet, may Allah bless him and grant him peace, said : 12,000 Muslims will not be defeated for lack of numbers. [Abu Dawud and at-Tirmidhi]

The official population of Muslims in India is counted above 200 Million, a number nearly 166 times bigger than the invincibility mark. Yet, Muslims in India are not only defeated and decamped but also subverted to the extent of imperceptible apostasy. The prophet PBUH can’t be wrong, we are!

Indian Muslims despite being divided into sects and Jamaat, the membership of each of these sects or Jamaat still numbers far above the 12000 mark. In my rough estimation Tableeghi Jamaat alone has more than 10 million members while Jamaat e Islami  Hind has more than a million active members around the nation. Both of these Jamaat claim to be on the right path and represent Islam in its purest form. They both claim to follow Quran and Sunnah almost exactly like the first community of the believers.

Still, Muslims like Ikhlaq are dragged out of their homes and slaughtered. Young Hafiz e Quran  Junaid is stabbed to death in running trains full of humans (not sure). Muslim traders like Pehlu Khan are brutally lynched. Muslims in villages like Naroda Patia, MuzaffarNagar and Shamli  are mass murdered and forced to flee. Young girls in Muslim Kashmir are ordered out of their homes and raped in turns sometimes in front of their family members. All this goes on without a word of protest, let alone coming forward to protect, on the part of the Indian Muslims.

Lynched, raped, murdered, displaced, sacked, demonized, smeared, Indian Muslims still claim to be on the right path, practicing true Islam, though shamelessly defying the above mentioned Hadeeth and blatantly rejecting the holy Quran which commands the protection of fellow Muslims as obligatory.

It’s certainly not been the act of the prophet of Allah PBUH to leave the followers of Islam so vulnerable and defenseless. None of the rightly guided companions of the prophet PBUH ever failed to defend themselves and their fellow brothers and sisters in faith. Who then do the Indian Muslims emulate? Whose Islam do they follow? It’s certainly not the Islam of Prophet Muhammad PBUH.

Is it the Islam of Jinah ? No not him, his followers have already left India for Pakistan. Is it then the Islam of M.Abul Kalam Azad who chose to stay inside his Karol Bagh Bungalow when Muslims were being slaughtered like sheep in Delhi?  Yes, may be! But is he solely responsible for creating the path of subversion and subsequent surrender of Indian Muslims to their Islamophobic political masters? Not solely but partially yes.

How far are the Islamic scholars (from seminaries like Deoband, Nadwa, Barelly etc.) responsible for inculcating this defenseless, watered down version of Islam in the Muslims of India ?

Let’s not answer this question until we know, who changed the act of establishing “Salaah” to something like reading “Namaaz” ? Who replaced “Salaah” the word from the holy Quran to “Namaaz” a meaningless word with no significance in Islam. Who authorized someone to change the Quranic word “Som” to a satanic word “Roza” and popularized it ? Who banned all the Islamic activities ( as were established by the holy Prophet PBUH in Masjid e Nabwi ) in Masajid and handed them over to some Firangis called “Secretary” and “President” ? Did the prophet of Islam PBUH hire a secretary or a president for the Masajid he built ? And when the Masajid in India running  under the tutelage of the above mentioned seminaries or the scholars trained therein changed their characters, so did the Muslims who manned them. When “Namaaz” couldn’t connect the readers to their Sustainer they left for schools in search of sustenance. The conspiracy is too deep.

Why is it crucial to revisit the trajectory and the matrix of the deterioration of Muslims in India ?

Because if left unaddressed the situation can worsen by the day. The enemies of Islam and Indian Muslims have gone global in strength, resource and determination. The demonization, subversion and consequent persecution of Indian Muslims has now gained international support with the Zionist block forging alliance with their Indian counterpart. Yes the same Zionists who supplied lethal weapons to Burmese army in order for them to annihilate unarmed and helpless Rohingya Muslims in their motherland. Remember the seven Rohingya refugees recently deported by the humanitarian Modi government to helplessly ( with similar helplessness as most of the Indian Muslims face today  ) face the shooting squad in Myanmar.

While the Muslims in India are still busy arguing about who among them is observant and who is particularly not, the global Islamobhobes are systematically mowing down the ummah from central African Republic to China to Myanmar to Syria to Yemen and to Afghanistan.

Been shorn of temporal power and deviously disconnected from the almighty Allah, Muslims of India have been being reared for Bosnia style genocide.Political isolation, racial and communal discrimination, forced conversion, ideological subversion; ghettoization, economic marginalization, forced migration, incapacitation and self-flagellation are some of the early signs of the impending catastrophe.

What else is likely to emerge?

More fitna in the guise of reforms and reformers. divisive agencies will masquerader as humanitarian organizations, lethal poisons will be sold as lifesaving drugs, dehumanization of Muslims through both mainstream and social media, mass incarceration and judicial rejections.  What is the way out?

Repentance, Tauba and turning to the book of Allah.

The endless massacre of Muslims since 9/11

Indian Muslims : The road ahead!

Indian Muslims and the Meccan period of Islam : An analogy