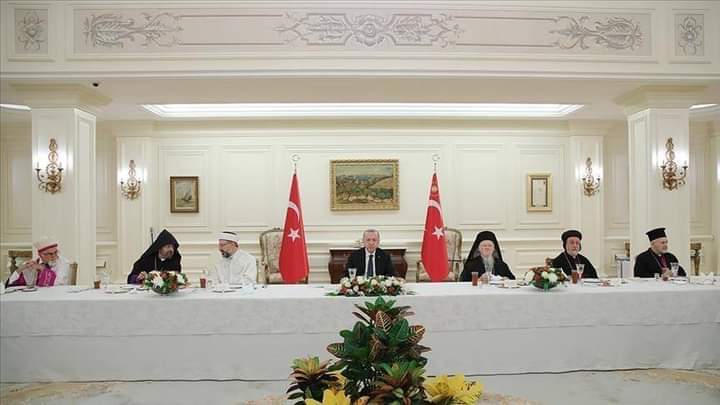 Turkey’s Jewish community on Wednesday said that President Recep Tayyip Erdogan has always been constructive, supportive, and encouraging toward them.

They responded to a tweet by the US Department of State condemning Erdogan for alleged anti-Semitic remarks.

“While tragedies in the region are deeply saddening – & global rise of anti semitisim is unacceptable- it is unfair & reprehensible to imply that President Erdogan – @tcbestepe – is anti-Semitic,” the community tweeted.

While tragedies in the region are deeply saddening – & global rise of anti semitisim is unacceptable- it is unfair & reprehensible to imply that President Erdogan – @tcbestepe – is antisemitic. On the contrary, he has always been constructive, supportive & encouraging towards us. https://t.co/XMfV5bXicb pic.twitter.com/CBAIX0lSvo

“On the contrary, he has always been constructive, supportive & encouraging towards us,” they added.

The US Department of State on Tuesday “condemned President Erdogan’s recent anti-Semitic comments regarding the Jewish people” in a statement.

Erdogan on Monday criticized Israel for attacks on civilians in Gaza and the Al-Aqsa Mosque. He also criticized the US arms sale to Israel.

Accusing Israel of being a “terrorist state” and violating Jerusalem, he also said it was “ruthlessly” bombing civilians in Gaza.

Erdogan said that those supporting Israeli actions in Jerusalem and Gaza would go down in history as being complicit in child murder and crimes against humanity.

Since this weekend, worldwide protests have been conducted to voice solidarity with Palestinians after Israel launched relentless air strikes on Gaza since May 10.

At least 217 Palestinians have been killed, including 63 children and 36 women, and 1,507 others injured in Israeli attacks on the Gaza Strip since May 10, according to the Palestinian Health Ministry.