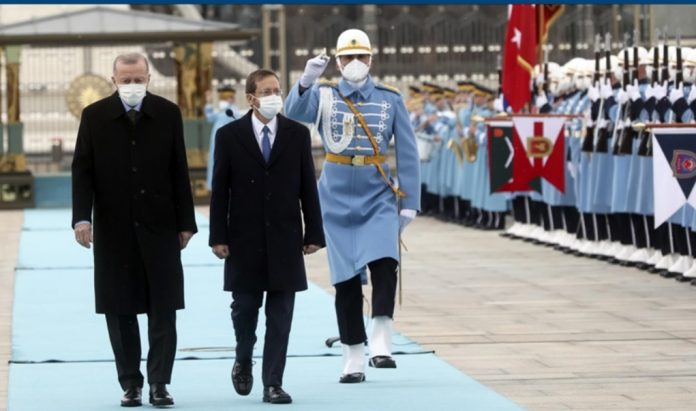 Herzog was initially welcomed at Ankara Esenboga International Airport in the capital by Ibrahim Kalin, a top aide and spokesman for President Recep Tayyip Erdogan.

After leaving the airport, Herzog visited Anitkabir, the mausoleum of Mustafa Kemal Ataturk, founder of the Turkish Republic, and laid a wreath at Ataturk’s gravesite.

“It is a distinct privilege to be visiting this historic site, immortalizing the great visionary, Mustafa Kemal Ataturk,” Herzog wrote in the memorial book at Anitkabir.

“May we follow in the wisdom of this great leader’s legacy of progress and peace, boldly choosing the path of collaboration and welcoming the many fruits to be reaped from promise of a safer and more stable world for our nations, our faiths, our region and the world,” he added.

Herzog also wrote a chapter from the Psalms, an Old Testament book: “Turn from evil and do good; seek peace and pursue it.”

Then, Erdogan welcomed Herzog with an official ceremony at the presidential complex.

On Twitter, the Israeli president said he was grateful to Turkish president “for this warm welcome at the Presidential Complex.”

“I am a firm believer that all peoples, faiths, and states in our region can and should live in peace, and that partnerships will bring blessings and prosperity for us all.”

During his two-day state visit, Herzog is expected to meet with Erdogan for bilateral talks.

Erdogan and Herzog are set to hold a joint news conference after a meeting between the delegations of the two countries at the presidential complex.

On Thursday, Herzog will meet with members of the Jewish community in Istanbul.

Herzog’s visit, the first by an Israeli head of state in many years, is seen as a step towards moving from a period of strained ties to improved relations with Turkiye.