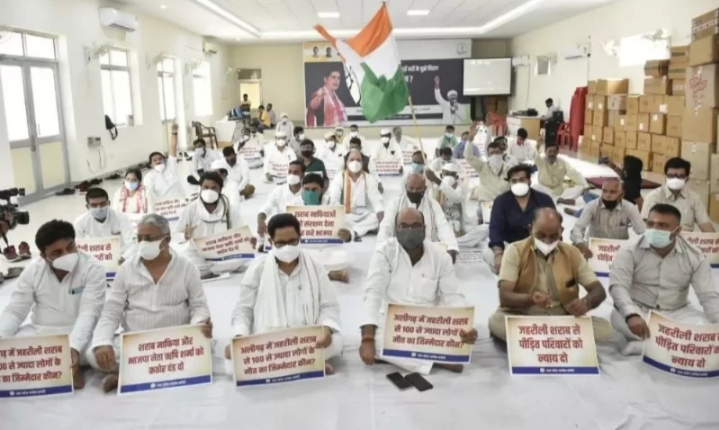 Dissent, anger and now anguish. The Congress in Uttar Pradesh sank into the realms of despair on Wednesday as soon as the news of former union minister Jitin Prasada joining the BJP came.

UPCC president Ajay Kumar Lallu was busy staging a dharna inside the party office in protest against the Aligarh hooch tragedy, completely oblivious of the crisis in the party.

While Lallu did not comment on Jitin’s departure from the Congress, his supporters claimed that it was no loss for the party.

“Did he win any recent election? If he has gone, it is no loss for the Congress,” said a Lallu supporter.

The young party workers, however, vented their ire against the party high command, particularly Priyanka Gandhi Vadra, for demolishing the Congress.

In a WhatsApp group run by these leaders, party workers ‘congratulated’ Priyanka for finishing the party.

One leader wrote, “Priyanka is directly responsible for the state of affairs. She has leased the party to left wing leaders who do not understand the ideology and culture of the Congress.”

Sources close to Jitin Prasada said that his main grouse was that Priyanka did not give him time to discuss political issues and Rahul Gandhi did not wish to speak on UP affairs.

“Jitin’s father, Jitendra Prasada, was a leader of stature in the Congress and if he has been forced by circumstances to leave the party, there has to be something very, very wrong,” said one of his supporters.

“He has been spearheading a campaign against atrocities on Brahmins and the BJP will now use him to assuage the feelings of Brahmins. The Congress chose to ignore him and his campaign and the advantage now lies with the BJP,” said a former UPCC president.

Another UPCC president admitted that the state of affairs within the party was going from bad to worse.

“The problem is that no one is willing to listen. The entire Gandhi family turns its face away from reality and the result is that today, a party like Apna Dal has nine MLAs while the effective strength of the Congress is five because two Rae Bareli MLAs have turned rebels,” said another former MLA.

Senior leaders said that the party would remain in single digit in the next assembly elections if the party high command did not change its style of functioning.

Congress sources said that several leaders were preparing to resign from the party after Jitin – some of those who supported the G-23 group.

The chief minister said that Prasada joining the BJP would further strengthen the party in Uttar Pradesh.

UPCC president Ajay Kumar Lallu, on the other hand, has termed Jitin Prasada as a ‘betrayer’.

“In the Congress, he became a member of parliament and then a minister. He was recently made in-charge of West Bengal during elections. The Congress has given him so much but what has he done in return?” he asked.

Lallu said that Jitin Prasada’s departure would not make any difference to the party which runs on ideology. “People come and go but the party goes on,” he said. — IANS