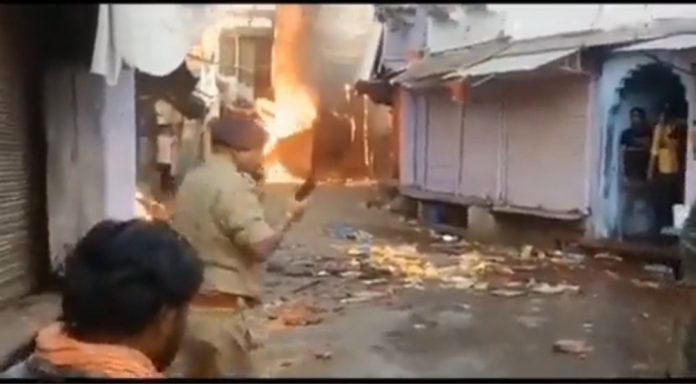 Jaipur : After communal tension broke out in Karauli city of Rajasthan following stone-pelting at a motorcycle rally passing through a Muslim-dominated area on Saturday, the district administration has extended the curfew till April 7 along with continuation of internet suspension till further orders.

An Independent councillor, Matloom Ahmed, has been booked for allegedly inciting the violence in Karauli, sources said.

The sources added that Ahmed, who has been identified as the main conspirator of the violence, is absconding.

Ahmed has been accused of pelting stones at the rally, inciting violence and gathering crowd to attack those taking part in the rally.

As per sources, the Rajasthan Police have mentioned his name in the FIR and booked the accused under Section 307 of the IPC.

Meanwhile, the other accused persons arrested for the violence in Karauli were presented in the court by the police after their medical examination at the district hospital on Monday. All of them were sent to police custody for two days.

District Collector Rajendra Singh Shekhawat said that efforts are being made to maintain peace and order in Karauli.

He also held a meeting with the veterans of the district on Monday evening and appealed to them to restore peace in the area.

Meanwhile, amid the curfew on Monday, the examination of Rajasthan Board was conducted by the administration as per the schedule.

Government offices and courts were also opened on Monday on the instruction of the district administration, even as mobile units of the police kept patrolling the city.— IANS

Karauli (Rajasthan) : Muslim houses were burnt-out with the help of police after the curfew was imposed