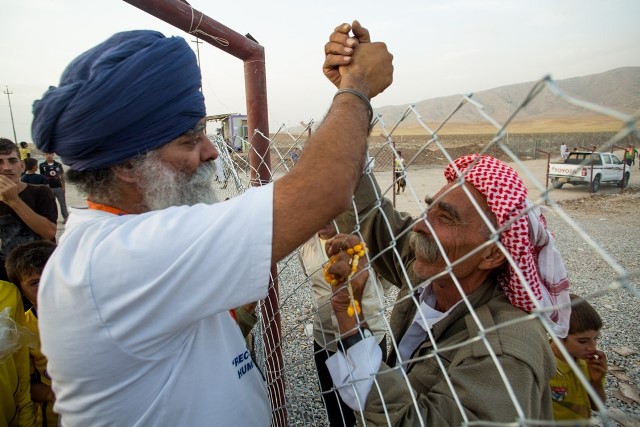 When we were serving the Rohingya refugees, we were called anti-nationals and Muslim appeasers on social media, NGO director Amanpreet Singh said.

The NIA had issued notices to the said individuals on 16 January. Two days later (18 January), the UK-based NGO was reportedly nominated for the prize. On the same day, NIA postponed its probe against people associated with Khalsa Aide.

The NGO is one of the groups whom the NIA has served notices after they expressed their solidarity with the ongoing farmers’ agitation against three farm laws in India.

Khalsa Aid was founded by the British Sikh activist Ravi Singh in 1999. It has chapters in various countries, including India. The NGO works on the principle, ”Recognize the whole human race as one, to serve humanity”.

The organisation is known for helping refugees and other persecuted groups across the world. Its members were also seen distributing tea and food items during anti-CAA protests held in 2019 and 2020.

Reacting to NIA notices, Khalsa Aide had said, ”A large-scale indiscriminate NIA investigation of this nature against voluntary agencies, groups and individuals who provide humanitarian support is unprecedented in Indian history,” the NGO said in a statement released on its website on 16 January. ”We urge all international bodies and monitoring agencies to hold India to account on what appears on the face of it a politically motivated step.”

The NIA postponed the interrogation the day the Nobel nomination was announced.

”There was meant to be a hearing of two key Indian team members today and tomorrow [Monday and Tuesday], they [the NIA] postponed it. They were informed on the phone that the hearing is postponed till further notice,” Ravinder Singh, founder of Khalsa Aid, was quoted saying by The Hindu.

In an interview with Mini in 2019, Amarpreet Singh said that when they helped Rohingya refugees they were called anti-nationals and Muslims appeasers.

”When we were serving the Rohingya refugees, we were called anti-nationals and Muslim appeasers on social media, but when we told them there were Hindu Rohingya refugees and Muslims alike, then everyone kept quiet,” Singh told Mint at the time. ”Our aim is to do selfless service that goes beyond the realms of faith or community, a service for the weak and marginalized.”