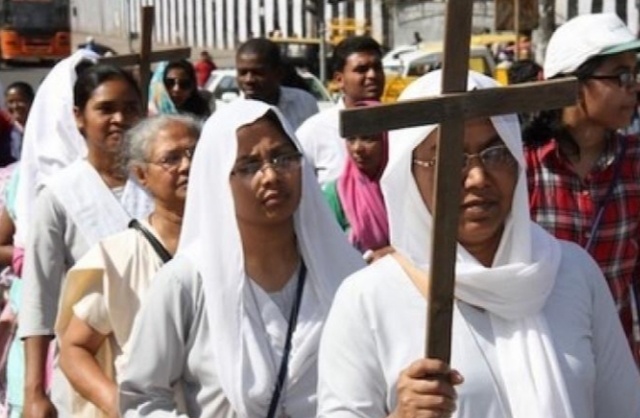 New Delhi:  The so-called ‘Love Jihad’, the Anti-Conversion laws have become a handy tool to persecute the religious minorities particularly Muslims and Christians .As many as 34 incidents were reported in January 2021 alone from BJP-ruled states Madhya Pradesh and Uttar Pradesh.

According to the report prepared by the United Christian Forum (UCF), which  that tracks the unprecedented violence being faced by the minority Christian community in the country, the incidents range from instances of physical assaults to threats and intimidations and arrests and detentions based on false police complaints.

Chhattisgarh took the lead with a total of 9 incidents followed by 7 incidents in the state of Madhya Pradesh.

Speaking to Muslim Mirror, UCF coordinator, A C Michael pointed out that Police authorities clearly show bias in favour of Hindutva fundamentalists who bring false complaints against poor Christians ironically when the complainants themselves are perpetrators of violence.

A case in point happened on 3rd January 2021 when a group of religious extremists barged into a prayer meeting attended by 25 Christians in Shahjahanpur in Uttar Pradesh and severely assaulted several people gathered there for prayers. However, the police registered an FIR against the pastor of the congregation and three others under sections 3 and 5(1) of the U.P. Anti-Conversion Ordinance, 2020.

On a bare reading of the Anti-Conversion Ordinances, it is clear that it is an arbitrary piece of legislation because of several reasons such as the vagueness of definitions in the Freedom of Religion Ordinance that causes even a charitable activity to be seen as “allurement” under the anti-conversion ordinances, said Michael who is also a former Member of Delhi Minorities Commission

The anti-conversion ordinances also provides for disproportionate punishments, for instance, the proviso to section 5(1) of the U.P. Anti-Conversion Ordinance, 2020 stipulates that unlawful conversion of a minor, a woman or a member of the SC/ST community shall be punished with up to 10 years of imprisonment and a fine of Rs. 25,000/- or more.

It is to be noted that a division bench of the Supreme Court of India held in Sushil Murmu v. State of Jharkhand (2004) 2 SCC 338 para 19, that “the principle of proportion between crime and punishment is a principle of just deserts that serves as the foundation of every criminal sentence that is justifiable.

As a principle of criminal justice, it is hardly less familiar or less important than the principle that only the guilty ought to be punished. Indeed, the requirement that punishment not be disproportionately great, which is a corollary of just deserts, is dictated by the same principle that does not allow punishment of the innocent, for any punishment in excess of what is deserved for the criminal conduct is punishment without guilt.”

Furthermore, by laying the burden of proof upon the accused to prove his innocence, the Ordinance has abrogated the procedure established by law under section 101 of the Indian Evidence Act, which stipulates as follows: “Whoever desires any Court to give judgment as to any legal right or liability dependent on the existence of facts which he asserts, must prove that those facts exist. When a person is bound to prove the existence of any fact, it is said that the burden of proof lies on that person.”

The Supreme Court of India held in the case of Uniworth Textiles Ltd. v. CCE (2013) 9 SCC 753, that “the burden of proving mala fides lies on the shoulder of the one who is alleging it”.

Whereas the premise of the Ordinance is to curb unlawful religious conversions, the intention of its framers is highly questionable because of its vague definitions and arbitrary provisions violating several fundamental rights including the freedom of religion, the freedom of speech and expression, the right to privacy, right to equality and the right to liberty, he further underlined.

The report states that “It is indeed unfortunate that recently, these anti-conversion laws have been rampantly misused by police officers to target poor Christians in villages in the states of Madhya Pradesh, Uttar Pradesh and Chhattisgarh. Many times, Christians have been arrested and kept in police custody for holding prayer services at their home with friends and family members. For instance, on 13th January 2021, the police arrested two Christians who were attending a prayer meeting in Seoni, Uttar Pradesh and registered an FIR against them under sections 3 and 4 of the Madhya Pradesh Freedom of Religion Ordinance, 2020.

It is without doubt that these unconstitutional laws are being widely misused by the state to target poor Christians who are lawfully exercising their right to practice, profess and propagate a religion of their choice as guaranteed under Article 25 of the Constitution of India thereby perpetuating injustice and prejudice in the society”.

761 cases of violence against Christians in India in 2021: Report