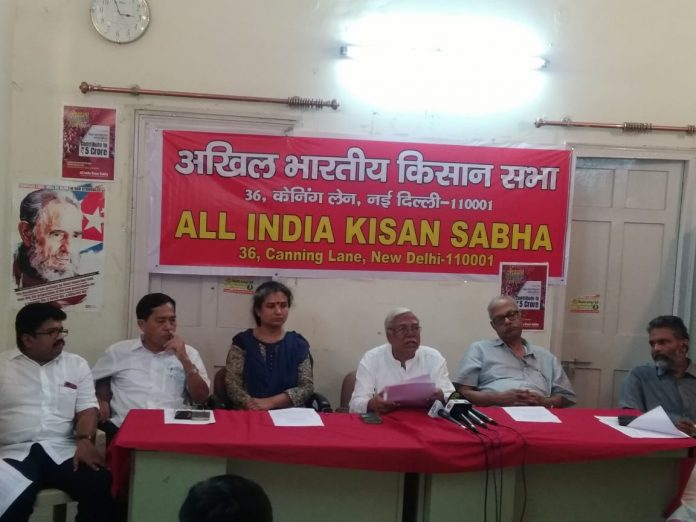 New Delhi: Around 20 lakh people across the country are expected to participate on the call given by All India Kisan Sabha and supported by other organisation to “Jail Bharo struggle on the Quit India Day”. The organizers said they are receiving widespread support from various sections of the society as it would be “historic’ protest against the Modi Government.

Addressing a presser here, organizers said the  jail bharo call is  part of the ongoing struggles by the peasantry and the working class and noted agri-scientist Swaminathan also  extended support to  the call  to mark  the Quit India Day – 9th August 1942 as jail bahro.

The workers in thousands under the banner of CITU will join the peasants struggle at all district head quarters as an action of solidarity. In Delhi, there will be solidarity rally and courting arrest in the Parliament Street.

Hanan Mollah said 10 crore signature collected from the peasantry, working class and public will be submitted to the Prime Minister through district collector/ magistrate and around 3 to 4 lakh people will court arrest them across the country. “Narendra Modi, Kisan virodhi” slogan has  been hit in the rural areas as more and more farmers are joining the struggle, he added.

Attacking the government, he said the main thrust of the struggle is to reverse the wrong policies being pursued by the BJP led Central Government that intensifies the already acute agrarian crisis. The BJP has given up all its opposition to FDI and the Modi Government has announced FDI in all sectors including multi brand retail marketing and agriculture. Along with this the declaration of contract farming to aid private profiteering will facilitate iron grip of corporate companies on Indian agriculture.

The 9th August struggle on the quit India Day will rebuff the complete surrender of Modi Government in front of imperialist driven Foreign MNC’s like Walmart, Bayer, Monsanto etc. US company Walmart entering India by taking over Flipkart will be resisted by all sections of the people including workers, peasants and petty traders, he added

“The BJP-RSS leadership has to clarify their political stand on this surrender and whether they have given up their Swadeshi slogans forever.”

Former MP and CITU leader Tapan Sen said the Regional Comprehensive Economic Partnership (RCEP) being pursued by Modi Government is a mega regional trade deal that will open up land in India for takeover by foreign MNC’s who will have to be treated on parity basis with Indian Companies. Seed and input costs are expected to rise in the wake of mega mergers like Bayer taking over Monsanto and ChinaChem taking over Syngenta.

“Dairy sector employing over 100 million people who supplement their meager income from crop based agriculture will be badly affected as big players in Australia and New Zealand will dump milk products in India.  AIKS has given call to observe 23rd August as demands day of dairy farmers across the country against dumping of milk products.”

The main slogans of the Jail Bharo strike include freedom from indebtedness, legal guarantee of MSP for all crops at C2+50% with comprehensive procurement support, stop FDI in agriculture and marketing and no contract farming to aid agro corporate companies, redistributive land reform, halt forcible land acquisition, Rs.5000 monthly pension to all small, marginal peasants and agriculture workers, Crop insurance scheme covering all crops, irrigation and electricity to all fields, minimum wage to agricultural labourers, full implementation of MNREGA by linking with agriculture.

The jail bharo movement is supported by different organizations of peasants, agriculture workers, dalits, ex servicemen etc thus reflects the emerging unity of all basic classes against the anti-national anti-people economic policies of the RSS-BJP combine and Modi Government.

The organizers said the movement will be historic one as they mobilized people across the country.