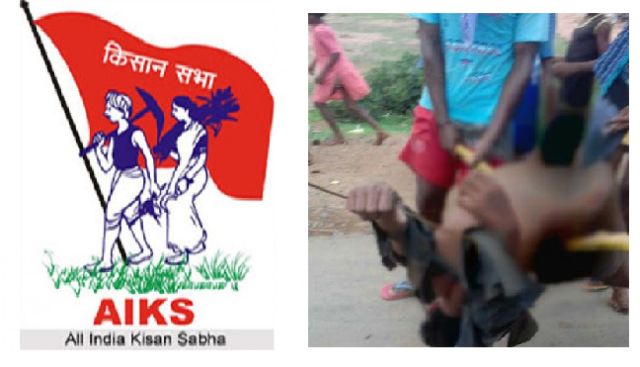 New Delhi: All India Kisan Sabha (AIKS) Thursday strongly deplored the tragic incident of mob lynching of two youths Murtaza Ansari and Charku Ansari. It demanded that Supreme Court must intervene in the matter to protect the life of citizens. It also asked the BJP government in Jharkhand to arrest the culprits immediately.

AIKS said the incident in Godda District of Jharkhand that exposed the cell rule of RSS. In the name of the cow, the vigilante groups are taking a life of innocent people who are making a livelihood out of cattle economy is unacceptable. The police also work in connivance with the killers and register cases against the killed while doing everything to make an alibi for the murderers. Such open violation of the law could happen only under the rule of Prime Minister Narendra Modi who is conveniently maintaining silence’ when innocent citizens are being killed since the murder of Muhammad Akhlaq of Dadri in early 2015.

This is part of series of crimes happened in different parts of the country. Just three weeks back one person was killed in Jabalpur in Madhya Pradesh which is also ruled by BJP. More than 35 persons have been killed in mob lynching so far by vigilante groups belong to Bajrangdal and Viswa Hindu Parishath. Except in one case in Jharkhand in which a local BJP leader was among those punished, no perpetrators of murderers were punished so far in anywhere in the country underlines the strong patronage of the RSS-BJP combine. Nobody is safe under the Modi Raj that symbolizes the cell rule by RSS is the general feeling among the public all over the country. The law and order situation is pathetic and even judges could be killed and the killers could be off the hook.

AIKS urged the Raghubar Das Government led by BJP in Jharkhand to arrest immediately all the culprits and set up Judicial Commission to probe the mob lynching and to provide Rs 1 crore each as compensation to the victims.

AIKS also demanded that the Supreme Court should intervene and ensure protection to the life of citizen from cow vigilantes backed by RSS.