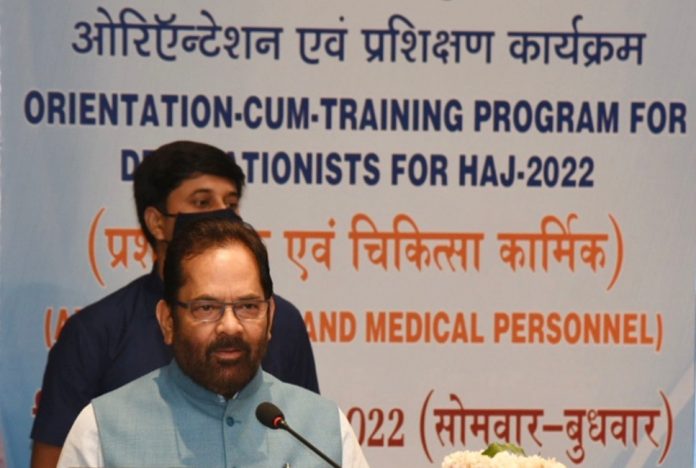 New Delhi:  Minority Affairs Minister Mukhtar Abbas Naqvi once again claimed on Monday that despite the doing away with the (Haj travel) subsidy, there has been no increase  in the charges on Haj pilgrims, demonstrating that many had just engaged in “political deceit” over the matter for decades.

Inaugurating a two-day orientation and training programme for Haj 2022 deputationists,  Naqvi  also made a tall claim that, despite Saudi Arabia’s reduction in pilgrim quotas for all countries this year due to Covid restrictions, India’s Haj quota is still higher than many notable Islamic nations.

Speaking on the occasion, Naqvi said that the Government has ended “political deceit of Haj subsidy” with transparency and commitment to “Decisions with Delivery”. The government had done away with the Haj subsidy in 2017. The Indian government has made arrangements to ensure that Haj pilgrims performing Hajj after two years are not burdened financially, he added.

However, the Hajj in 2022 is likely to be more expensive. Pilgrims who go through the Hajj Committee of India would have to pay a minimum Rs. 5 lakh each. Private tour operators will charge significantly more, at least one lakh rupees extra. Since the current government abruptly removed the Haj travel subsidy in 2017, the cost of performing haj has increased more than double.

It is to be worth mentioning that the expense of performing the Hajj and Umrah pilgrimages has escalated to an unsustainable level since the BJP came to power in 2014, with the government hastily ending the Haj travel subsidy in 2017 that appeared to appease hardcore Hindutva groups who used to clamor for removing the subsidy. The Modi government’s sudden decision was in contravention of the Supreme Court order in 2012 which directed it to phase out the subsidy gradually by 2022. Furthermore, the government also disregarded the court directive to offer a one-time lump sum amount of subsidy for the promotion of minority girls’ education but not a single penny was paid towards this fund.

The constant rise in Haj costs is pinching Indian pilgrims, many of whom come from low-income families. The drop in Haj aspirants may be observed in the fact that the Haj Committee of India received just over one lakh applications from pilgrims this year, despite a quota of 79,237 pilgrims. Earlier, the Haj Committee of India used to receive a flood of applications for performing Haj. Other causes including inflation and COVID-19 restrictions are also at play in the massive rise in Haj expenses.

In his speech, the Minority Affairs Minister also claimed that despite Saudi Arabia’s reduction in pilgrim quotas for all countries this year due to Covid restrictions, India’s Haj quota remains larger than that of many notable Islamic countries.

The Saudi government has not allowed the entry of foreign pilgrims since 2019. In 2021 the capacity was limited to 60,000 Saudi citizens and residents who received the vaccine, due to the measures that were imposed to curb the pandemic.

Inaugurating a two-day orientation-cum-training programme for Haj 2022 deputationists held  here on May23-24,  the minister  said  the entire HGO procedure has also been made transparent and accessible online and added that around 2000 Muslim women will perform Haj in 2022 without a “Mehram” (male companion) who will go to Haj without lottery system.

Continuing his speech, Naqvi said the entire Haj 2022 process has been planned in accordance with the Indian and Saudi governments’ respective guidelines. These include eligibility conditions, age limits, and health-related limitations, among other things.

The 100% digital/online Haj process has realised Indian Muslims’ desire of “Ease of Doing Haj” and is one of the best examples of “Digital India”, he added.

Making the entire Haj procedure digital/online, including the Digital Health Card, the “E-MASIHA” health facility, and “E-luggage pre-tagging,” as well as offering all information about accommodation and transportation in Makkah-Madina to Haj pilgrims in India itself.

In the two-day training programme, Haj deputationists were given all the information about Haj pilgrimage, accommodation in Makkah and Madina, transport, health facilities, safety measures etc.

Naqvi said the flights for Haj 2022 will start on June 4. In the first phase, Haj flights will start from Bengaluru, Cochin, Delhi, Guwahati, Lucknow and Srinagar embarkation points.

In the second phase, Haj flights will start on June 17 from Ahmedabad, Hyderabad, Kolkata and Mumbai.