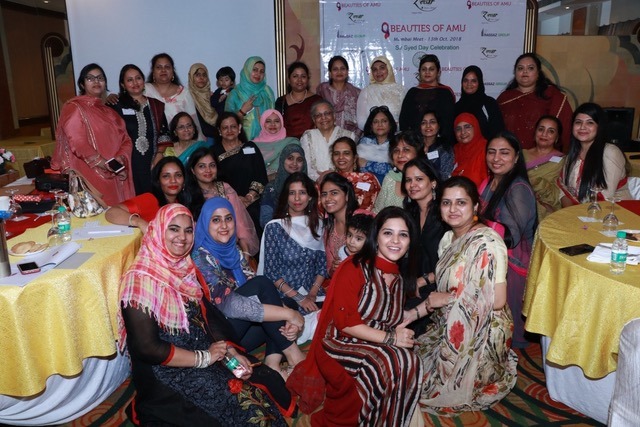 Mumbai : The Aligarh Muslim University Alumni Group formed by female community of this iconic citadel of modern education, known as Beauties of AMU held its Mumbai Meet  towards the Sir Syed Day celebrations on 13th October at Hotel Marine Plaza, Mumbai. Noted philanthropist, business giant and AMU alumni, Raees Ahmad, MD, Rassaz Group was the Guest of Honour at the event. Faridoon Shehryar, a well known Bollywood journalist was among the AMU stars which illuminated the galaxy of AMU achievers at the event. Faraz Haider, director of War Chhod Na Yaar fame attended the meet in capacity of another AMU stars while famous lyricist Arafat Mehmood stole the show with his magical spell of beautiful words in perfect sync with the event. The event saw a huge turnout including personalities from all walks of life who build up the social circuit of Mumbai.

Sir Syed lived briefly in the city which now boasts of being the financial capital of India, hence it is imperative to take the message to this very city which had alumni association focussing on male alumni. Since it couldn’t offer much space to the female alumni based in the city for the nostalgic networking over chai. Beauties of AMU took the plunge and brought them all on the same page, allowing them their own space for discussing and dealing with issues of societal concerns. At the event Mrs Farrukh Sayyeda highlighted the importance of space for women. She said it’s good to be ‘Mrs Somebody’ but anything that gives you self identity is rather more important and brings self-satisfaction. This identity is not necessarily connected to financial income, added Mrs Farrukh (former principal). Extending the thoughts, Mr Rais Ahmed (Guest of Honor) talked about the role of Sir Syed in Women Empowerment.

Mumbai is more popularly known for the Indian film industry which has considerable contribution from Aligarh, such as Khwaja Ahmad Abbas, Saeed Jafri, Javed Akhtar, Surekha Sikri, Naseeruddin Shah, Dilip Tahil and to name recent additions, there are Anubhav Sinha, Faraz Haider, Faridoon Sheheryaar and Arafat Mehmood. Alumni of AMU are front runners in every industry in every corner of the country and the world as well, whether it is Frank Islam of USA, who was the member of Barack Obama’s contingent to deliberate with Muslim world, being a key figure in the economy of USA or the pharma giant Cipla’s founder Khalid Hameed, who has served humanity in Africa so well that nobody would ever find an example like it. Aligarh has come out of its cocoon with the first and second generations and prepares its next generations following the footsteps of Ismat Chugtai and Qurratulain Haider. Beauties of AMU is playing the catalyst in this inferno which would reassure the paying back to the great institution of Aligarh, which has contributed largely for the cause of nation building. 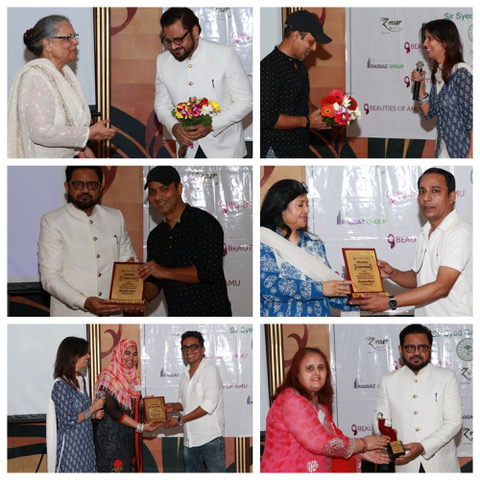 Felicitation for AMU Achievers in Bollywood

Beauties of AMU(BOA)  is a social welfare organization formed by female alumni of Aligarh Muslim University that functions to spread awareness about education and empowerment of women of all sections of society. Started off as a Facebook group in 2017, by Iram Raza, a graduate of Department of Mass Communication, Aligarh Muslim University, Aligarh, this group has done meets in 3 cities (New Delhi, Lucknow, Aligarh) so far and the Mumbai Meet Up towards Sir Syed Day was a part of the reunion initiative of the group in the time span of 1 year. The organization now plans to hold similar events in other parts of country for reuniting the female alumni of the university living in those cities, spreading out the message of goodness and universality. BOA has been organizing meet-ups in different cities of India for the female alumni who haven’t been included in the old boys associations, providing them a platform to meet and greet and share happiness and nostalgia of their days at Aligarh furthering the reunions to social causes. BOA has been instrumental in organising several events that contributed well to the cause of social welfare in general and AMU alumni in particular, that makes it stand apart from other alumni associations concerned with AMU.

‘Come forward and contribute to the society’ ; Dr. Hamida Tariq urges to ‘Beauties of AMU