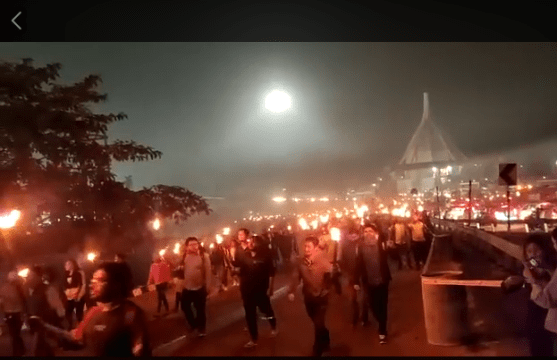 Agartala, Dec 10:  Despite exemptions to execute the proposed legislation on citizenship in the Autonomous District Council areas and regions under the Inner Line Permit (ILP), the agitating organisations and political parties on Tuesday remained firm on their demand for withdrawing the Citizenship (Amendment) Bill (CAB), claiming the exemptions would not be able to check infiltrations or protect the demographic positions of the indigenous people of the northeast region.

Effigies of Modi, Shah, Sonowal, Himanta burnt at several places. All the roads were blocked and Police have arrested several protesters.
Copy of CAB also burnt.

But these news are not covered by any mainstream news channel of India.

Normal life has been hit in Tripura following statewide indefinite bandh called by tribal parties and organisations against the Bill. Most government schools, offices, banks and financial institutions in the council areas remained closed and vehicles were off the roads on Monday.

In Maligaon area of the city, a government-run bus was pelted with stones and a scooter set on fire, sources said. Shops, markets and business establishments kept shutters down, while educational and financial institutions remained closed for the day, the official sources stated.

Other states in the North East are also facing similar protests. Huge processions were taken out in different areas of Guwahati, with protesters raising slogans against the contentious Citizenship (Amendment) Bill, 2019.

Agitators engaged in a scuffle with security forces near the Secretariat and Assembly buildings in Guwahati, when they were prevented from moving forward, police sources said. Train services across Assam were affected as picketers blocked the tracks, a spokesperson of the Railways said.

The influential body NESO spearheads the stir in the northeastern states (excluding Sikkim), inhabited by around 45.58 million people with 27-28 per cent indigenous tribals.

NESO Chairman Samuel B. Jyrwa said the TADCs in Assam, Meghalaya, Mizoram and Tripura exist and ILP enforced in Arunachal, Nagaland and Mizoram for many dacades but could not check the infiltration and demographic structures of the indigenous people of the North-East.

“While the TADCs and ILPs don’t have full control over the foreign nationals, the infiltration outside the TADC and ILP notified areas would also affect the demographic pattern of the North-East,” Jyrwa told IANS.

The IPFT, junior ally of the ruling BJP in Tripura, is also determined to continue their stir against CAB.

“The tribals were once a majority in Tripura. With the influx from then East Pakistan and now Bangladesh, the indigenous people have become a minority (31 per cent). This is despite the state and Central governments having taken a series of steps,” IPFT Assistant General Secretary and party spokesman Mangal Debbarma told IANS.

Senior Communist Party of India-Marxist tribal leader and former Tripura Tribal Welfare Minister Jitendra Chaudhury said the formulation of the proposed CAB is entirely against the very principles of the constitutions and idea of Indian nationhood.

“After the Partition in 1947 and the subsequent developments, influx of crores of people during the past several decades had already flooded the eastern part of the country, causing multiple problems in the social, cultural, political and economic life of eastern India,” Chaudhury, President of the TRUGP, told IANS.

The Joint Movement Against Citizenship Amendment Bill (JMACAB), a conglomeration of many tribal based local and regional parties, NGOs and student and youth organisations of Tripura, including INPT, has also decided to continue their stirs.

“The proposed exemptions in the CAB would not be able to check infiltration and migrations of people into the North-East. We want full protection to our life, culture, demographic structure of the indigenous people,” INPT General Secretary Jagadhish Debbarma told IANS.

The ruling MNF (in Mizoram), an ally of the ruling BJP-led National Democratic Alliance at the Centre, however, thanked the government to exempt Mizoram and two other northeastern states from the purview of the proposed citizenship legislation.

The MNF President and Mizoram Chief Minister Zoramthanga while addressing the party members in Aizawl said that due to the collective agitations and efforts of the people, various organisations and churches the union government took the exemption decision.

The CAB seeks to fast-track Indian citizenship to Hindus, Sikhs, Buddhists, Parsis, Christians and Jains from Bangladesh, Pakistan and Afghanistan who entered India till December 31, 2014.With agencies inputs.