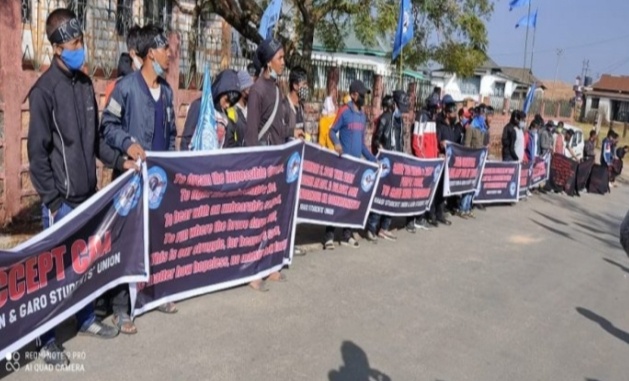 Guwahati/Shillong/Agartala – The North East Students’ Organisation (NESO), an apex body of eight students and youth organisations of seven northeastern states, on Friday observed a “Black Day” across the region against the Citizenship (Amendment) Act (CAA).

The All Assam Students’ Union (AASU), a constituent of the NESO, announced that it would relaunch its protest against the CAA from December 12.

The anti-CAA protests across the northeastern region, comprising eight states, were suspended following the Covid-19 pandemic.

AASU sources said that they would organise ‘Gana Hunkar’ (mass shouting), where traditional and folk music instruments would be played as a mark of protest.

NESO Chairman Samuel B. Jyrwa said that black flags and black banners were displayed in all the important places of all seven states of the region as part of the protests against the CAA.

“The ‘Black Day’ was observed on Friday to give a message to the Government of India that we are against this Citizenship (Amendment) Act 2019 and also at the same time to remind our people and our posterior of yet another political injustice that the government perpetrated on the indigenous peoples of the northeast region of India,” Jyrwa said in a statement.

All eight northeastern states and neighbouring West Bengal witnessed violent protests for many weeks last year and early this year against the CAA.

The Congress, the Communist Party of India-Marxist, and almost all local and tribal based parties in the eight northeastern eastern states have strongly opposed the CAA.

Different tribal based parties including the CPI-M’s frontal body — Tripura Rajya Upajati Ganamukti Parishad (TRUGP) — had filed petitions before the Supreme Court against the law, contending that it is against the interest of the people of the northeast.

TRUGP President and former Tripura Tribal Welfare Minister Jitendra Chaudhury said the enactment of the CAA is entirely against the very principles of the Constitution and idea of Indian nationhood. -IANS