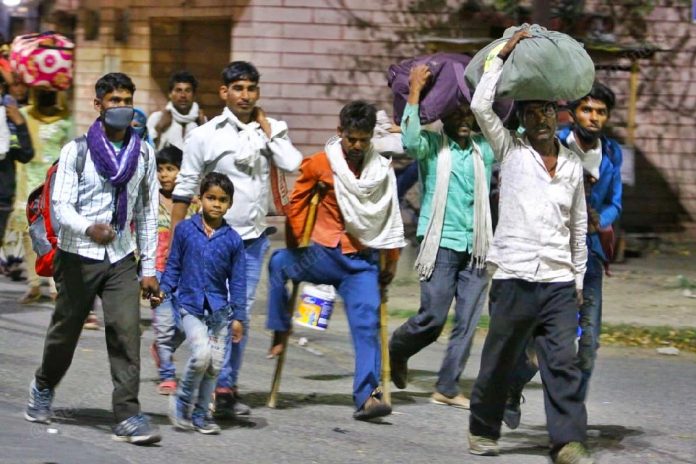 However you look at the Covid pandemic it is the worst and most unprecedented calamity to hit mankind all over the world in the last one hundred years.  From Norway near the north pole to New Zealand near the south pole . Covid has spared no one.  It has spread huge economic and industrial disaster throughout the globe.

In India some of the more visible victims of the Covid pandemic that started surging there in March are the over 100 million internal migrant laborers and daily wage  workers in the bigger cities.  They suddenly became unemployed when Prime Minister Modi announced a nationwide lockdown with a four-hour notice on the night of March 25.  In all major cities hordes of thousands of workers and their families including women and children were seen assembling in thousands to return to their homes in faraway villages.  Millions of laborers in the cities of Delhi, Mumbai, Bangalore, Poona, Chennai, Hyderabad, Ahmedabad, Calcutta, Surat, Cochin etal were totally stranded when the small contractors, shops, restaurants etc, whom they worked for, shutdown suddenly.

The owners of these small businesses typically pay workers their wages at the end of the day after holding back previous wages of several weeks.  On March 25 after locking down their places of businesses most of the owners disappeared without paying the laborers their back wages.  The central and state governments, the police and civic authorities declined to help the laborers, either to track their employers or to provide any temporary relief help, like food and shelter.  The owners of the cramped small houses where the laborers were living evicted them for non-payment of rent.  In fact to enforce the government lockdown in many cities policemen were seen brutally beating with long sticks hordes of laborers including women, who were on the streets walking towards their remote villages.

As the government had shut down trains and buses, the laborers and their families, with no other means available, started walking towards the villages where their family homes are.  A vast majority of these laborers are from rural areas of Uttar Pradesh, Bihar, Madhya Pradesh , Andhra Pradesh where there are neither industries nor construction projects nor small businesses to provide jobs.  They were trying to walk four hundred to six hundred miles to their home villages.  Imagine whole families trying to do that under the blazing May sun with temperature hovering above 90-degree Fahrenheit.  Even as that was unfolding and being shown by media on TV channels every day, government authorities refused to provide either transport or food to the stranded laborers.  The long and brutal walk to home resulted in the deaths of many on the sides of highways or on railroad tracks.

The only relief for these laborers were many good Samaritans who in several instances loaded them on their trucks and vans to transport them, or small charitable non- governmental- organizations that provided free food rations or cooked meals  to them.  Many of these NGOs distributed them free food in the low-income localities in cities and cooked meals on the highways or in parks in cities.

These NGOs in India that have been helping the needy for several years now and are subsisting on public charity, swung into action quickly.  Through Facebook and Twitter, they sent appeals all over India and abroad for donations.    Some of the Indian-American NGOs responded quickly by starting fundraising campaigns.  Two such notable NGOs are:  Association of Indian Muslims of America (AIM), Washington DC, and Association for India’s Development (AID), College Park, MD.

AIM started their fundraising campaign in early March, largely to help the victims of the gory violence by religious extremists in some low-income localities in Delhi in late February.  However, in the wake of the Covid pandemic in March as the upsurge of thousands of suddenly unemployed laborers happened due to the government’s India-wide lockdown, AIM expanded their campaign to include providing relief help to the unemployed migrant workers, regardless of what religious community they belong to.

Starting in mid-April AIM has responded to quite a few  India-based relief NGOs by sending them substantial donations.  AIM’s fundraising campaign was helped by the advent of the Islamic holy month of Ramadan in late April.  Islam places special emphasis on giving charity in this Ramadan.

Some of the relief NGOs in India to whom AIM has sent donations for the purpose of providing food and shelter relief to unemployed migrant laborers are:  1. Socialist Party (Sandeep Pandey), in Lucknow and several districts in Uttar Pradesh;  2. Aman Biradari (Harsh Mander) in Delhi and districts in Haryana and Uttar Pradesh; 3. Hindus for Human Rights, Cochin and districts in Kerala and Tamil Nadu; 4. Goonj (Priyanka Tiwari) , Delhi and several districts in north India; 5. Pol-Pan, Khambatt, Gujarat; 6. Association for India’s Development (Mohan Bhagat), College Park, MD.  Several chapters in Uttar Pradesh, Bihar and Andhra Pradesh.

AIM plans to continue its current fundraising campaign in the rest of the year 2020, to provide further relief- help to the unemployed migrant laborers who have been rendered poor.  AIM also appeals to all NRI organizations in US to similarly provide financial help to the community-service based NGOs in India who are giving relief help to the victims of the Covid pandemic

In past the Association of Indian Muslims of America  raised funds in US to help relief efforts by India-based NGOs.  Some examples are :  Catastrophic floods in Kerala, 2018;  Tsunami in Tamil Nadu, 2005; Earthquake in Gujarat, 2001; Cyclone in Orissa, 1998.

Kaleem Kawaja is the Executive Director of the Association of Indian Muslims of America, Washington DC

Provide jobs to migrants, drop cases against them: SC

Collective failure in protecting the fundamental rights of migrant labourers