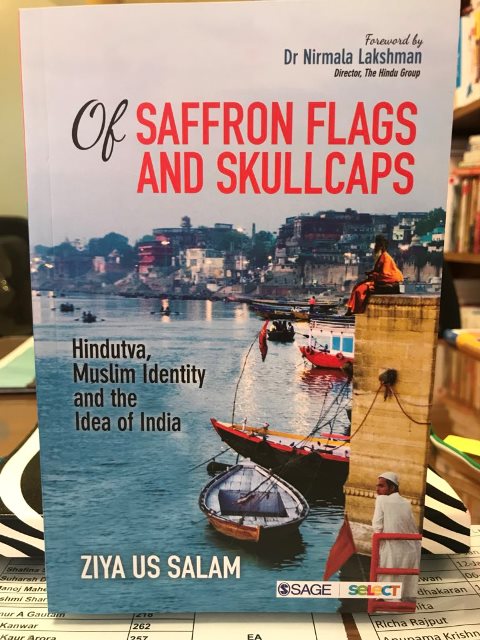 Of Saffron Flags and Skullcaps by Ziya Us Salam

Ziya Us Salam’s book Saffron Flags and Skullcaps (Sage, 2018) is the result of his deep love and concerns for India. He loves the fundamental syncretic character of Indian society and its people, their multiple traditions and their welcoming nature. For him unity and diversity and secularism are no mere slogans but are the very conditions of being an Indian. He is deeply concerned to see the rise of forces which are hell bent on changing the basic character of India’s culture and society.

Joining the growing debate on the nature of Hindutva ideology and its implications for the rich pluralist ethos of Indian culture, Salam provides a very comprehensive overview of the genesis of Hindutva ideology, tracing its history to the founding of Hindu Mahasabha in 1915 and RSS in 1925. The role of some institutions like Geeta Press in disseminating this ideology, particularly the role of its monthly magazine Kalyan, is also taken note of by the author.  He also links this ideology to the Cow Protection movement started by Swami Dayanand Saraswati in late nineteenth century. The Brahmanical nature of Hindutva ideology is emphasized in his discussion of the bias and discrimination faced by the Dalits. Interestingly a little known book by Narendra Modi titled Karmyogi(2007), a collection of his lectures, which is out of circulation now, defended the manual scavenging by Dalits and found a spiritual purpose behind this abominable practice.

A very important feature of Hindutva ideology is the appropriation of some well -known historical figures and creation of new icons who do not find a place in history books. Sardar Patel, Bhagat Singh and B.R. Ambedkar are three important historical figures who the right-wing is trying to appropriate in different ways. Salam chides Hindutva brigade for forgetting Patel’s pluralism, “his warning against creating an atmosphere of fear and distrust” and his banning of RSS after the assassination of Gandhi. He highlights Bhagat Singh’s atheism, his reading of Marx and Lenin and his disapproval by Golwalkar for his failure despite his martyrdom, “and failure implies some fatal flaw” for the RSS leader. Salam reminds the Hindutva lot that Ambedkar, who renounced Hinduism altogether, saw little difference between Savarkar and Jinnah and how his effigies were burnt by RSS for his advocacy of Hindu Code Bill. Deen Dayal Upadhyay is not quite an icon for Salam as he “stood for the assimilation of Christians and Muslims in the national mainstream if they gave up their distinct characteristics and admitted to their Hindu ancestry.”  Madan Mohan Malaviya, described as liberal communalist by Bipan Chandra, was more Hindu than Indian in his politics as is suggested by his association with Hindu Samaj, Hindu University and Hindi Sabha.

Salam tries to understand the nature of RSS and some Hindutva fringe elements through their flag and cow politics. The disrespect shown to the Tricolour by RSS after the assassination of Gandhi and the elevation of saffron flag at different occasions shows their hypocrisy in present times. Salam’s discussion of the cow politics, the material basis for vegetarianism and the role played by Yadavas in the cow protection movements in the twentieth century is a very important section of the book. He traces the roots of present cow politics to cow protection movement of the 19th century and repeats that Vedas and Dharma Sutras do not find anything wrong with cow killing. In fact Brahmanical texts consider cow killing up-pataka(a minor crime) and Brahmins got their dakshina in cattle in ancient India. “As more and more land came under cultivation, the economic importance of the cow increased.”

A deliberate false reading of history worries Salam in this book and he sets out to correct many misconceptions about popular, or notorious, historical figures.  He strongly reiterates the point that many famous battles in history had nothing to do with religion but were battles for political supremacy. He reads both right-wing and left-wing versions of history and, interestingly enough, finds a striking similarity in the account of Golwalkar and Irfan Habib in their refusal to accept division of history in religious segments. He quotes a passage from Golwalkar’s Bunch of Thought where Golwalkar highlights the role of Artillery Chief Ibrahim Gardi from the Hindu side against Afghans in the third battle of Panipat in 1761. Irfan Habib’s views about Bhagwan Das and Man Singh fighting Rana Pratap for the Mughals also prove that the battle of Akbar and Rana Pratap was a political battle. A lesser known fact is that Hakim Khan Sur was the commander of Rana Pratap. Salam also presents a rounded view of Babur, dwelling on many interesting contradictions in his personality and his contempt for Mughals and Uzbeks. He refuses to see Aurangzeb in black and white terms and, supported by the work of Truschke, William Dalrymple and Rajmohan Gandhi, uncovers many important facts about his rule: Rajput’s support for Aurangzeb in the war of succession, a greater percentage of Hindus in his nobility than under any other ruler before him, imperial grants given to Brahmins, his skill at playing veena and the composition of Raag Darpan during his reign.

Salam exposes the hollowness of the good Muslim versus bad Muslim argument which has gained currency in recent years. The best example of this false binary was witnessed in the debates over changing the name of Aurangzeb Road and rechristening it A.P.J.Abdul Kalam Road.

Neatly divided into three sections, the second section of the book tries to understand different aspects of Indian Muslim identity through its othering by the rabid right-wing.  Drawing his examples from his own growing up years, from films, literary fiction and from cricket Salam painfully realizes that “It is not easy being a Muslim in India, it never has been, especially being a secular one.”  From being suspected of harboring extra territorial loyalty to facing difficulty in renting or buying a house to encountering  actual violence, the othering of Muslims is the new normal in contemporary India.

Salam tries to understand Muslims’ religious identity through the influence of many organizations  and some contentious issues which remain part of public discussion. He analyses the role of Jamiat Ulama E Hind, Jamaat E Islami Hind, Tablighi Jamaat, Sufism and even influential Quran scholars like Aslam Pervaiz in popularizing ideas about Islam in India. The important role played by  Jamiat in India’s freedom struggle, the journey of Jamat E Islami from its rejection of secular democracy to its acceptance of pluralist democracy and the patronage given by the present government to Sufism are discussed by the author at length.  In the same way, Salam explains, that the much misunderstood term Jihad ‘is essentially a peaceful agitation with the self’ and terrorism or mass killing is outlawed in Islam.

Salam’s recent book Till Talaq Do Us Part( Penguin,2018)discusses instant triple talaq and Muslim  Women’s right to divorce. In the present book also he takes up the issue of women’s right to divorce and also their right to lead prayers in a mosque. The Prophet was the first feminist and his wife Khadija, a very successful businesswoman and entrepreneur, was truly an example of an empowered woman. He also sketches the contribution of women like Farhat Hashmi in popularizing the teachings of Quran and takes to task faulty and half-baked account of Islam by writers like Noor Zaheer in works like My God is a Woman.

Despite the rise in incidents of hate crimes and the general prejudice and insecurity faced by Muslims, Salam is optimistic that the tolerant spirit of India, its very important civilizational trait, will ultimately survive. What gives him hope are incidents like many Hindus saving the lives of Muslims and Muslims saving Hindu pilgrims, Sikhs offering their gurdwara to Muslims for Friday prayers,  a Muslim doctor not losing his humanity despite being called a terrorist, and a Hashimpura massacre Muslim survivor using the ringtone ‘Chak De!India’. Citizens rising in NotInMyName protest, civil servants and army men raising their voice against communal and casteist hatred and lynchings give Ziya Us Salam hope that “the fight for the soul of India has started, an India where everybody has freedom to practice, propogate any religion or no religion, an India where everybody has the right to choose a vocation and to be treated equally before the law.”

Written in informal, anecdotal style, free from academic jargon, the book at times narrativizes author’s own life lived essentially in Hindu localities with Hindu friends. Salam also recaptures his moments of discovery in reading books and gaining important insights about questions that have troubled his inquisitive mind. Saffron Flags and Skull Caps surely answers many frequently asked questions about contemporary Hindu, Muslim and Indian identity which cannot be reduced to a cap or a flag.

Book Review: Inside the Tablighi Jamaat by Ziya Us Salam

Lynch Files (Book) : The story of hate, horror and camouflage

Till Talaq Do Us Part: A timely book to understand the Islamic concept of Nikah, Talaq & Halala