The “exaggerated and one-sided story” of Kashmiri pandits’ exodus depicted in controversial movie Kashmir Files stands exposed after a letter dated 19 September 1990 claimed that the “drama was staged by BJP-RSS” along with some Kashmiri leaders and then governor Jagmohan.

According to the letter (screenshot inset here), published in Alsafa newspaper on its 19 March edition, the Indian government “had drawn plans to massacre a large section of Kashmiri Muslims particularly those in the age group of 14 to 25”. The letter, surfaced online, was addressed to Muslims of Kashmir by 23 prominent Kashmiri Pandits.

The letter begins by admitting that the Pandit community was made ‘a scapegoat’ by Jagmohan, some self-styled leaders of their community & other vested interests. The writers call their exodus, a drama ‘in connivance with the State administration’. 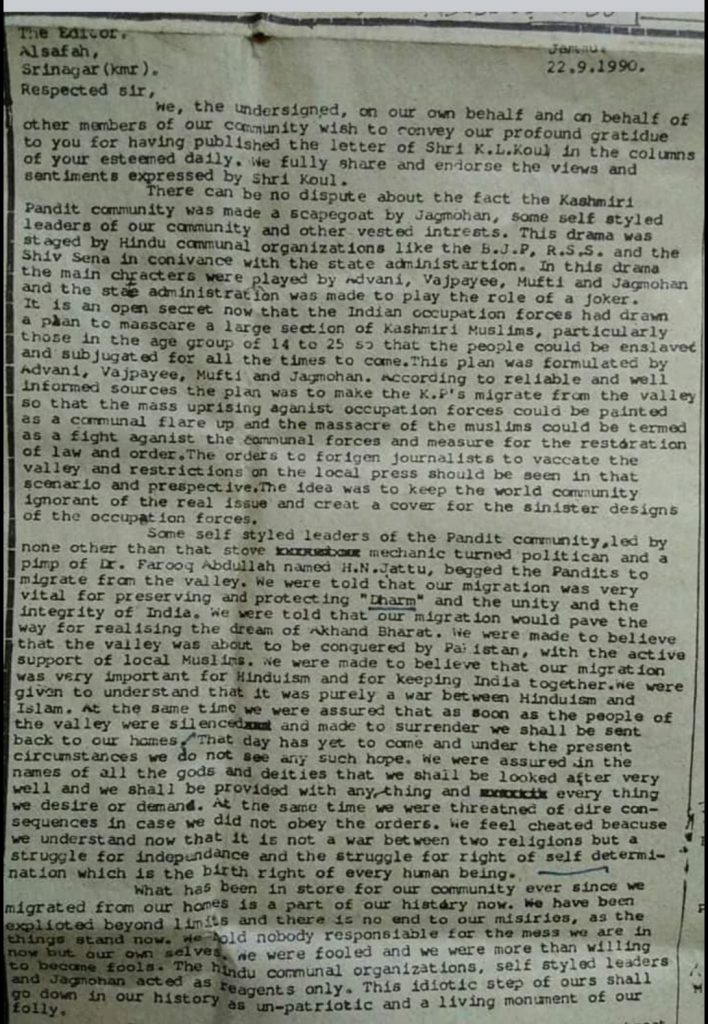 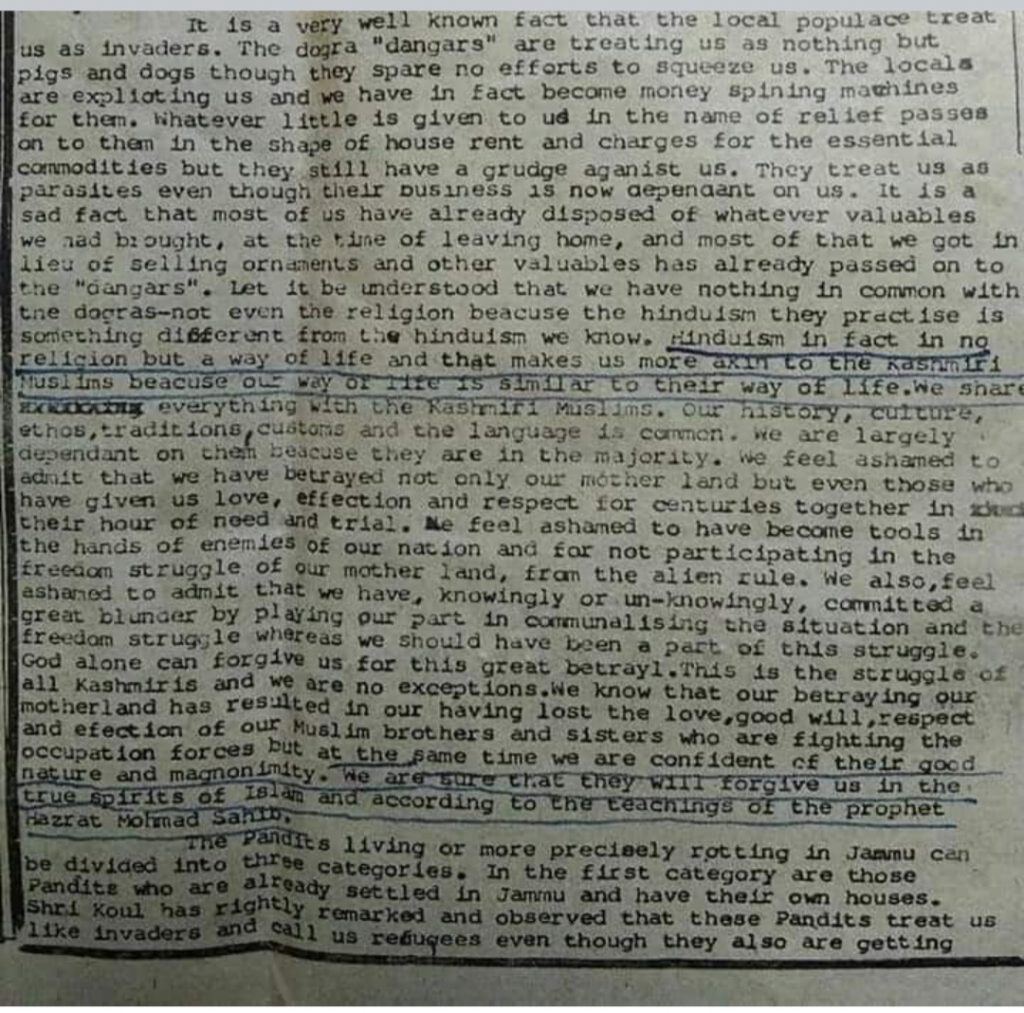 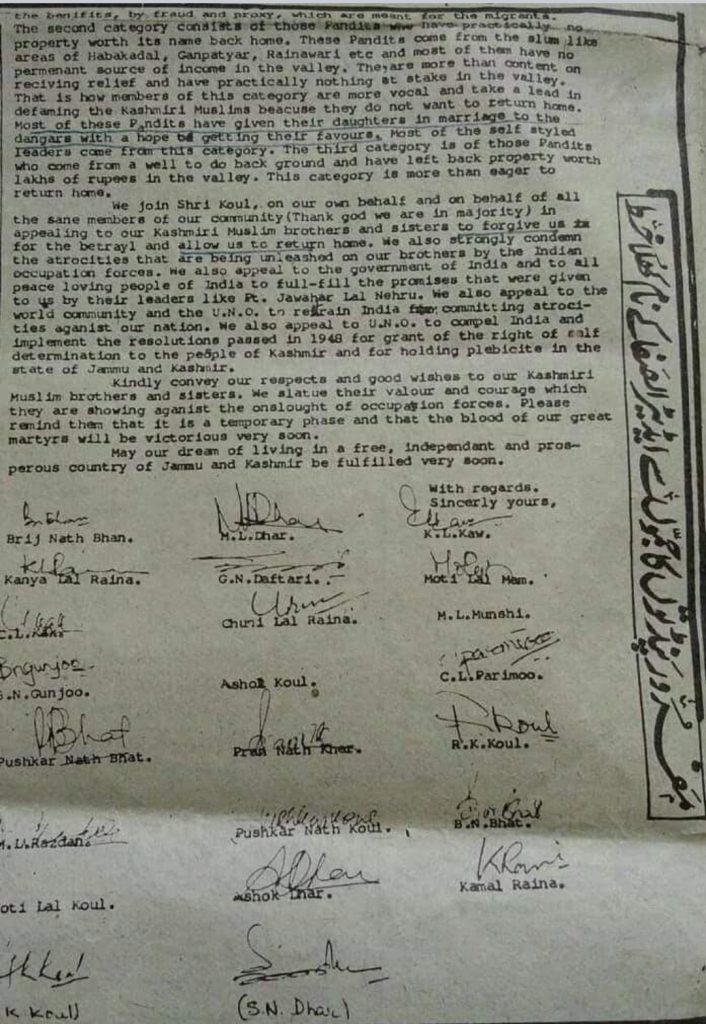 “This drama was staged by Hindu communal organizations like the B.J.P, R.S.S and the main characters were played by Advani, Vajpayee, Mufti and Jagmohan, and the state administration was made to play the role of a joker,” the letter reads.

The letter also says that the political struggle in Kashmir was given a communal colour by the Right Wing Hindu parties and thus Pandits were forced to leave the Valley.

“We share everything with the Kashmiri Muslims. Our history, culture, ethos, traditions, customs and language is common,” the Pandit representatives had said in the letter.

The representatives, in the letter, had appealed to Kashmiri Muslims to forgive them for the “betrayal” and allow them to return. They had also said that they condemn the “atrocities that are being unleashed” on Kashmiri Muslims by Indian forces.

In the letter, the KP representatives, had appealed the world and the UN to stop India from “committing atrocities” against Kashmiris.

THESE ALL ARE PAID ACTORS BY TUKDE-TUKDE GANG. TO KNOW REAL TRUTH OF KASHMIR, ASK A REAL KASHMIRI PANDIT, LIKE MITHUN CHAKRABORTY OR DARSHAN KUMAR. pic.twitter.com/hhoeiStlbK

“We also appeal the UNO to compel India and implement the resolutions passed in 1948 for grant of the right to self-determination to the people of Kashmir and for holding plebiscite in the state of Jammu and Kashmir.” the letter reads.