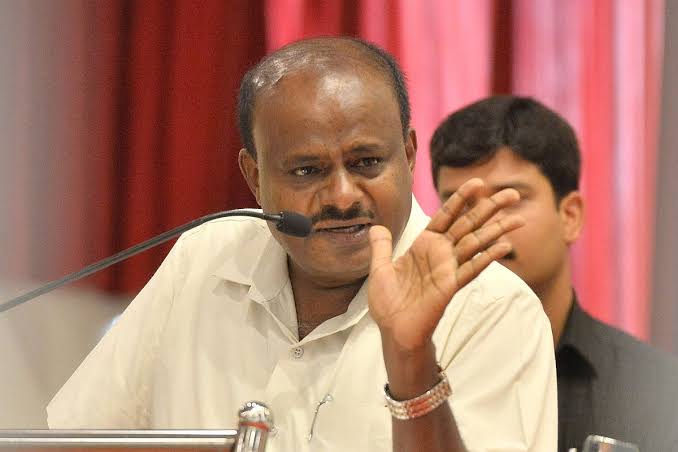 Vijayapura, Karnataka: Former Karnataka Chief Minister and JD(S) leader HD Kumaraswamy on Tuesday said he has nothing to learn from the RSS “Shakha” as he alleged that people who had been trained there have indulged in watching “blue film” at the legislative Assembly when the session was on.

The JD(S) leader was responding to state BJP President Nalin Kumar Kateel’s recent invitation to him to visit an RSS Shakha and learn about the activities of the Sangh.

“… I don’t want their (RSS) companionship. Haven’t we seen what was taught in RSS Shakha? How to behave in the Vidhana Soudha… watching blue films when the Assembly session was on. Isn’t such a thing taught to them (BJP) at RSS Shakha? Do I have to go there (to RSS shakha) to learn this?” HD Kumaraswamy asked.

Speaking to reporters on the sidelines of the bypoll campaign, he said, “I don’t want their Shakha. Whatever I have learned from the Shakha, the Shakha of the poor is enough. I have nothing to learn from theirs (RSS Shakha).”

HD Kumaraswamy was referring to an incident in 2012, when three ministers were caught on camera as they allegedly watched pornography on their mobile phones in the state Assembly during its proceedings, causing an embarrassment to then BJP government.

The three ministers had resigned following the incident.

Recently while referring to a book, HD Kumaraswamy had said that the RSS, as part of its “hidden agenda”, has created a team of bureaucrats in this country who are now placed at various institutions.

The BJP governments at both the Centre and in Karnataka were functioning on the directions of the RSS, and PM Narendra Modi is its “puppet”, Mr Kumaraswamy further said.

Following this, Nalin Kateel had invited him to come to an RSS Shakha and learn about the Sangh’s activities. AGENCIES