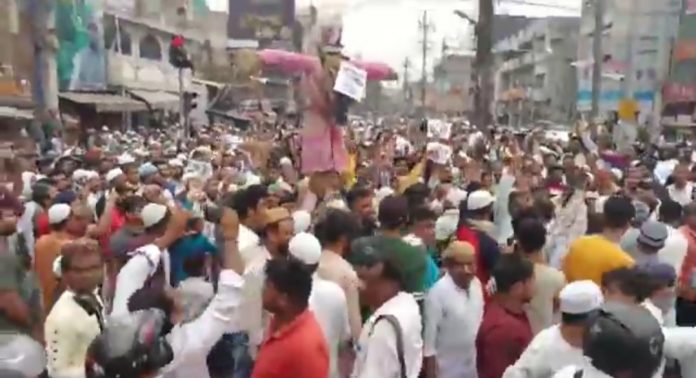 Two teenagers  died and over 10 persons severely  injured after police opened fire in Ranchi to disperse the mob of  thousands of Muslims who gathered at the Ranchi Main Road near Daily Market on Friday, June 10, to protest against  blasphemous  remarks of now expelled Bharatiya Janata Party (BJP) spokesperson Nupur Sharma on Prophet Mohammad.

A curfew has been imposed in the violence-hit areas of Ranchi. According to a report by news agency PTI, some policemen were also  injured while they were trying to control an irate mob near Hanuman Temple, situated on Ranchi’s Main Road.

As per the PTI report, the police fired in air and also had to resort to lathi-charge to control the mob that spilled out on the road after Friday prayers and pelted stones and shouted slogans.

“Few policemen have been injured. We are looking into the situation. We are reinforcing deployment,” a senior police official told PTI.

According to police, the agitation has been continuing since morning and picked up tempo after the Friday prayers. Several shops and establishments kept their shutters closed in protest against the remarks.

The protestors have been raising slogans demanding the immediate arrest of Sharma.

“More than 1,100 shops in the market were shut since morning in protest against remarks of Nupur Sharma and Naveen Jindal. We demand their immediate arrest,” PTI quoted New Daily Market Traders Welfare Association President Haji Md Hasim as saying.

Heavy security deployment has been made to control the situation and avoid any untoward incident, police further said.

Meanwhile, Jharkhand Chief Minister Hemant Soren, as quoted by ANI, said, “I suddenly received info about this worrisome (protest) incident… public of Jharkhand has always been very sensitive& tolerant… no need to panic. I appeal to everyone to refrain from participating in any activities that will lead to more such crimes.”

The row over the alleged remarks against Prophet Mohammad escalated on Sunday with protests from countries like Saudi Arabia, Kuwait, Qatar and Iran, prompting the BJP to take action against its functionaries and also assert that it respects all religions.

As the controversy intensified within the country and abroad, the BJP on Sunday suspended Nupur Sharma and expelled Jindal.