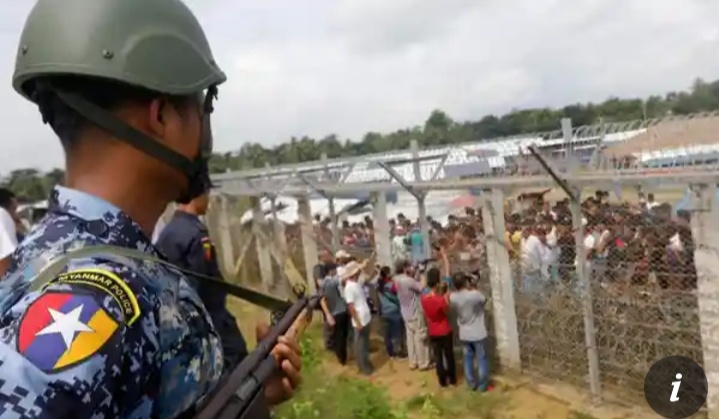 Pvt. Myo Win Tun said he received command from his chief who asked their company to “Shoot all they see and all they hear.” Win Tun said he carried out the orders and got into the act of killing 30 innocent faultless civilians and buried them in a mass grave near a cell tower and a military base. “We wiped out about 20 villages” said Pvt. Zaw Naing Tun adding further that he and his associates also dumped corpses in a mass grave.

Myo Win Tun and Zaw Naing Tun are the first members of the military of Myanmar to divulge forthrightly taking part in what UN officials described as a genocide campaign against the Rohingya Muslim minority of the country reported The New York Times.

When UN’s top court ordered the Buddhist-majority country to take measures and assure the protection of Rohingya Muslims whom its Secretary-General Antonio Guterres specified as “one of, if not the, most discriminated people in the world” from genocide, the military of Myanmar claimed it was only fighting Rohingya militants and Aung San Suu Kyi notoriously denied the allegations of genocide despite being a human rights icon herself in the past.

According to Rohingyas, they made their escape only after troops together with the local Buddhist populace reduced their villages to ashes and killed civilians. According to Medecins Sans Frontieres (MSF) an international, independent, medical humanitarian organisation that delivers emergency aid to the people affected by armed conflict, at least 6,700 Rohingyas including 730 children who were under the age of 05 were put to death in a month after the violence broke out in 2017.

According to Amnesty International, Rohingya women and girls encountered rape and abuse during the conflict at the hands of monks and the armed forces. According to a study titled “Forced Migration of Rohingya: The Untold Experience” conducted by Mohshin Habib, Christine A. Jubb, Salahuddin Ahmad, Masudur Rahman and Henri Pallard, at least 42,000 Rohingyas received gunshot wounds, 35,000 were thrown straight into fire, 18,000 women and adolescents were raped and an estimate of 115,000 Rohingyas were beaten by the authorities.

While common masses allied with Suu Kyi and the military, all stood in agreement in defence of this nerve-racking state of Rohingya Muslims, one-year state of emergency is declared in duration there and military generals have moved in opposition to Aung Suu Kyi who urged the people to protest against the coup. A week ago, 38 civilians were killed in a single day. Sentences of artists mocking military by way of their art were extended lately. Poets, performers, graffiti and digital artists, students, businessmen, retired civil servants, workers, men, women, teenagers, senior citizens all identically are out on the roads for weeks now to oppose the move and protect democracy. The defiance beyond shadow of a doubt is monumental and gallant but could this be contemplated as a way how democracies work?

Witnessing such an undaunted reaction, an uncomfortable question that penetrates the mind is where such a reaction laid inhumed when Rohingya crisis upheaved? Why people paid no heed when 2014 census in Myanmar refused to accommodate Rohingyas according to a UN agency. Why protesting voices went into hiding when Rohingyas were being treated as sub-humans and foreigners in their own land? In place of aid and support which Rohingyas needed from their fellow countrymen, people provided assistance to the authorities in arson, plunder and carnage. Urban population threated and scoffed Rohingya activists on stream. Artists never came out with something creative to protest against the injustice. Instead their floated justifications from Suu Kyi’s apologists and supporters that she needed to look the other way for the fear of military thus exonerating her. We saw blatant denial; we saw a cold response and an ear-splitting silence throughout.

When the people of Myanmar refused to acknowledge the basic human rights and democratic rights of Rohingya populace, they assuredly would not have envisaged the unfortunate days befalling them when they would have to protest for their own rights carrying the corpse of a teenager protester shot by military. They would not have reflected upon the fact that men with guns would barely make a distinction between them and the Rohingyas whom they were killing in cooperation a few years ago. Probably they didn’t know that a man carrying a gun belongs to no one but adores his generals alone. A civilian for him is only a citizen prior to manifesting resistance to his authority which then reduces him only to his “target.”

The disillusionment wave observed in some of the social media users of Myanmar is conspicuous in their discussions on the internet with Rohingya activists. A social media user according to an article published in TIME confessed that “they are now realising the common enemy is the military.” Some of them apologised to the Rohingya activists they treated roughly until now. A Transgender activist, Lily, according to the same portal revealed that she despite being mindful of what was happening to Rohingyas turned a deaf ear towards the issue. TIME reported her saying “Without international community’s strong condemnation and support, she thinks she and the people of Myanmar will end up like Rohingya people.

This disillusionment narrowly coincides with that of the War Poets also known as the Trench Poets who participated in the world war first and were later disenchanted. The war which they considered as glory previously proved to be a shock for them, traumatised them and changed their perspectives.

We can only hope that the disillusionment stays for the long haul and the people of Myanmar comprehend what democracy actually means only if they desire it truly. We can keep fingers crossed that the people realise the non-conformation of military, divest them of the sacred status and put their leaders and generals to the question. This problem right now not only persists in Myanmar but in various other parts of the world and the people of different countries can excogitate lessons from this situation.

Hariz Aftab is an independent researcher from Doda, Jammu and Kashmir and can be contacted at aftabhariz@gmail.com