This year around 1600  students from Shaheen Group had appeared for the NEET and out of those  1363 students scored more than the minimum marks.

‘This year 300 students of Shaheen Group have qualified for free  medical seats in government colleges , 10 of them are Hafiz e Quran who never went school. We admitted them in AICU   (Academic Intensive Care Unit ) and after four year of hard work 10 of them have successfully qualified to get admission in different medical colleges, said  Dr. Abdul Qadeer the  founder chairman of Shaheen Group of Institutions to MuslimMirror.com. 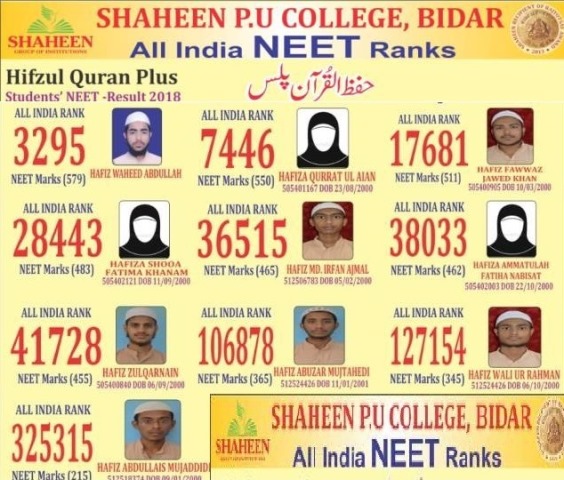 Haafiz-e-Quran Waheed Abdullah’s success is outstanding as he secured All India Rank (AIR) 95 and got 659 out of the total 720 marks.  Dr. Qadeer said like other Huffaz , Hafiz Abdullah also never went to a school and got free coaching at the Shaheen. He hails from Gorakhpur, UP.

Besides him, 9 other Haafiz, who got the elementary education in different Madaris, have also made to the list of the Shaheen students eligible for admission in  variou medical colleges based on their NEET 2018 score.

Dr Abdul Qadeer wants his experience and expertise to be utilized in other parts of the country. He is running different branches of AICU for dropout students and preparing them to appear in competitive exams as well as NEET.

‘We  will start regular batches for 10th pass students as well as crash course for repeaters  from 18th June , Dr Abdul Qadeer added.