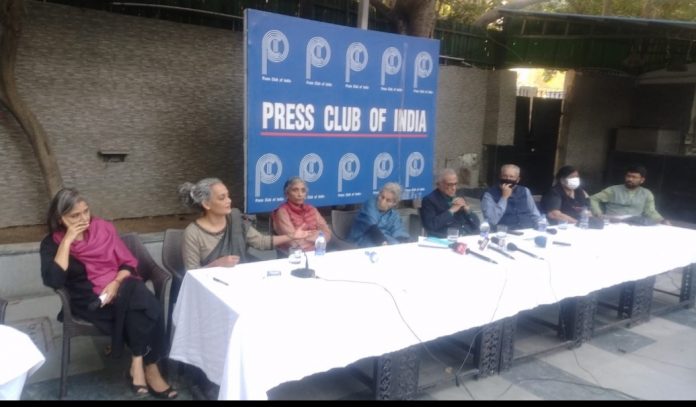 New Delhi: To marks two years of the communal carnage that shook several localities of Northeast Delhi in February 2020, a group of concerned citizens and organisations on Monday released a jury report.

The report released by what they called ‘People’s Tribunal’ indicated the complicity of all state actors in the killing of innocents and framing the victims in cases.

At a press conference held at the Press Club of India here, former Indian diplomat Deb Mukharji read out the a People’s Tribunal report.

Slamming the Delhi government led by Arvind Kejriwal for its partisan role, the Tribunal demanded that it must immediately set up an Empowered Group to look into all cases of inadequate and delayed compensation.

It said despite having all intelligence  the Delhi Police failed to take adequate measures to prevent the spreading of the riots. Widespread instances of police misconduct have been noted including misusing of technology to frame people, to biased and unjust chargesheets, the police have been even more complicit in the violence.

The Tribunal brought together survivor families and individuals from Northeast Delhi, field experts, and lawyers to testify before a Jury composed of people who have had long experience in their respective fields. It was a day-long, closed-door event that saw a series of discussions on five key themes: – Impact of State Apathy in Northeast Delhi – Testimonies of Families from Northeast Delhi – Medical Cases and State Response – Police Investigation and the Riots – Compensation – Access, Amount, Framework.

The State and Central governments must have programs for rebuilding employment opportunities for riot survivors who lost their livelihoods and provide them with crucial livelihood support (for example e-rickshaws, sewing machines, technical training and equipment).

To mark the carnage, and take forward the much-needed discourse on the lives of the victims, a group of concerned citizens and organisations – comprising National Federation of Indian Women (NIFW), All India Democratic Women’s Association (AIDWA), Constitutional Conduct Group (CCG), People’s Union of Civil Liberties (PUCL), United Against Hate (UAH), and Karwan -e -Mohabbat – came together on February 26, 2022, to organise a People’s Tribunal.