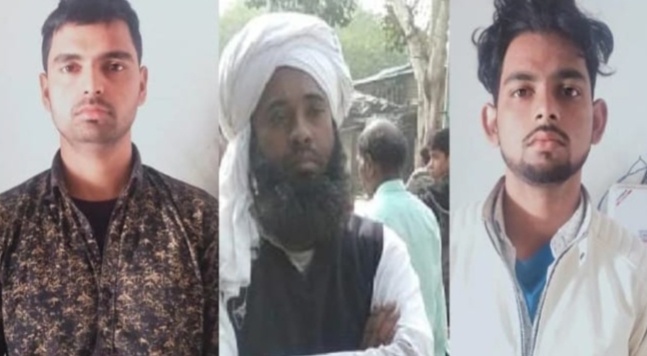 New Delhi: Muslims are particularly being targeted in BJP-ruled states including Uttar Pradesh in connection with love jihad, which is a conspiracy theory propagated by Hindutva extremists. 79 out of 86 arrested under Uttar Pradesh’s new ”love law” belong to the Muslim community.

In one case, 26 family members of a Muslim man, which included five women, were booked in Etah for allegedly forcing a 21-year-old Hindu woman to convert to Islam. Though the marriage took place on November 2017 as per the FIR lodged in the case, almost a week before the ordinance came into force, the police went ahead and booked them under its provisions, reported National Herald.

In Mau, an FIR was lodged against 16 members of a family, while in another case, 14 family members were booked in Sitapur.

Two of the FIRs were against non-Muslims under which seven persons were booked. They were charged with coercing women to convert to Christianity.

The Uttar Pradesh has promulgated Prohibition of Unlawful Conversion of Religion Ordinance, 2020 in a bid to put an end to love jihad. The ordinance prescribes a jail term of up to 10 years and a fine of up to Rs 25,000 for religious conversion carried out under ‘fraud’, ‘coercion’ or ‘enticement’.

The Uttar Pradesh police has said that they have filed 16 First Information Reports (FIRs), under which 86 people have been booked. There are women and two minor girl among those booked by the police.

Activists have raised their strong concerns over the enactment of the laws and the subsequent arrests. In December 2020, as many as 104 former IAS officers wrote to Yogi Adityanath-led government and sought withdrawal of the said law. They stated that Uttar Pradesh has become an epic centre of the politics of hate.

”This ordinance is against the Muslims in spirit and action. The police have taken action against Muslims despite the Hindu women in question giving statements that they had married the Muslim men willingly,” Lenin Raghuvanshi of the NGO People’s Vigilance Committee on Human Rights (PVCHR) said.

He added that the “hegemonic masculinity based on caste and patriarchy” has led to the eruption of these problems. In his opinion, a particular section in the society wants to maintain their hegemony. That’s why they are opposing interfaith and intercaste marriages.

Apparently, there is a nexus between the police and Hindutva goons. In several cases, the goons attacked Muslim men on the allegation of love jihad and handed them over to the police.

Muslims continue to face harassment in the name of love even after an affidavit was submitted by the Yogi Government in the Allahabad High Court last week, which said the aforementioned law was not aimed against any particular religion but was equally applicable to all religions and all forms of ‘forced conversions’.