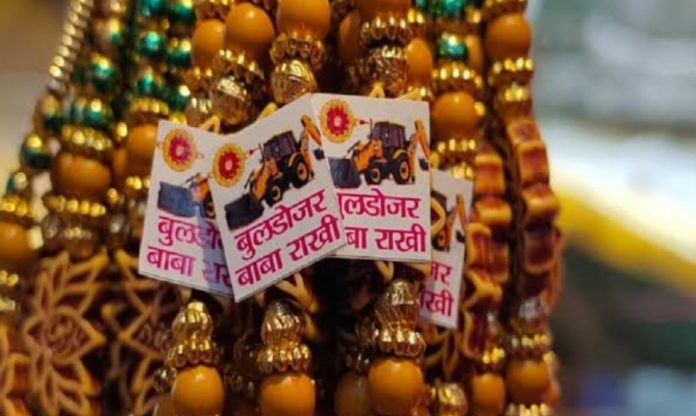 How hate has become a profitable business , and how a sacred festival has been communalized in India the rising demand of “Bulldozer Rakhi” in UP is just a manifestation of this communal politics in India under the BJP  government. The rampant use of  Bulldozer to demolish Muslim houses has popularized  CM Yogi among Hindu masses who is know known as “Bulldozer Baba”.

On the eve of Rakhi festival, the markets are fully decorated with Rakhis in UP.  Verities of  designer’s Rahkhis are on sale but the most in demand is ‘Bulldozer  Rakhi’. Yes, at the same time, bulldozer which became famous in Uttar Pradesh because of Yogi  and now in the form of Rakhi, which  will decorate the wrists of the people. Apart from bulldozers Rakhis, Rakhis with pictures of Vishwanath and Mahadev along with Rakhis with the faces of PM Modi, CM Yogi are also being sold in the market.

As soon as you go inside the wholesale Rakhi market in Dal Mandi area of Varanasi, you will find different types of Rakhi adorned in every shop,  these include Yogi-Modi and bulldozer Rakhi, other designs. Along with the Rakhis of Trishul and Damru, the symbol of the newly built Vishwanath Corridor is also attracting the attention of the people the most.

Few years back, Rakhis with the pics of  film stars like Salman Khan and Shahrukh Khan were very popular.