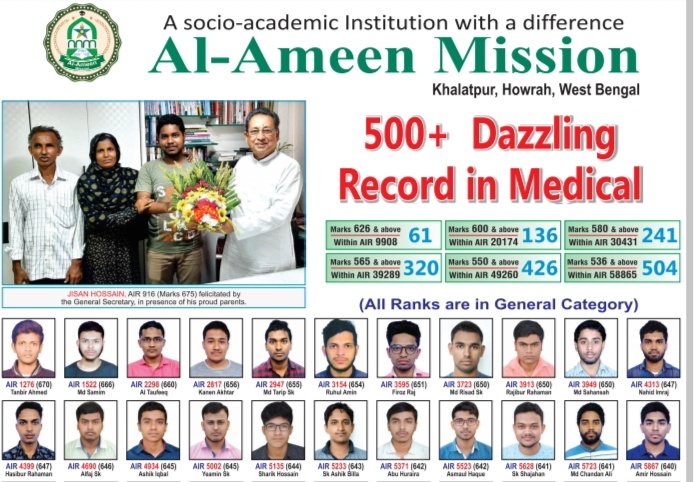 Jisan Hossain who scored the highest with 675/720 marks among the 504 students was facilitated by the NGO’s General Secretary  M. Nurul Islam in presence of their parents.

According to a Muslim Mirror report, Al-Ameen Mission has over 17000 residential students and more than 3000 teachers as well as non-teaching staff in their 56 branches across 15 districts of the state.

The NGO was started by M. Nurul Islam with just one small room in a madrassa building in 1987. Islam’s mission began when he started teaching a group of seven students in a small room of a madrasa in Howrah district of West Bengal.

Now his Al-Ameen Mission has produced more than 2400 doctors (MBBS & BDS) and 2500 engineers apart from scores of researchers, administrative officers, teachers and professors.

“I started coaching with 7 students of fifth class in 1986. In 1993 there were 11 students, four became doctors, four became engineers. Then came a feeling of satisfaction that I am doing the right thing. I never looked back,” he told Muslim Mirror.

“The motto was to give modern education with moral values in a fully residential system where students from all strata of the society, irrespective of their financial condition, would live, learn and grow together,” he added.