Education advocate M Nurul Islam, who started coaching seven students in small room of a madrasa where he was a teacher, never knew he would be once compared to great education reformer Sir Syed Ahmad Khan.

Through hard work and a commitment towards his moral compass, he was able to set up a learning center which is credited to have produced more than 2400 doctors (MBBS & BDS) and 2500 engineers so far apart from scores of researchers, administrative officers, teachers and professors.

Islam’s journey began in 1986 when he started teaching a group of seven students in a small room of a madrasa in Hawrah district of West Bengal. Now his Al-Ameen Mission has produced more than 2400 doctors (MBBS & BDS) and 2500 engineers apart from scores of researchers, administrative officers, teachers and professors.

Today Al-Ameen Mission has over 17000 residential students and more than 3000 teachers as well as non-teaching staff in their 56 branches across 15 districts of the state.

It was in 1976 that Nurul Islam, Secretary General of the Al Ameen Mission, set up the Khalatpur Junior High Madrasa when he was still studying his 10th standard. The idea was  educational empowerment of poor and backward minority sections.

The journey was tough and tiresome.  In May 1984, he started the Institute of Islamic Culture, setting up a hostel for the institute in 1986 in the Madrasa building itself with the help of door to door collections of fistful rice in his village, Khalatpur. In January 1987, it was renamed as Al-Ameen Mission.

“I started coaching with 7 students of fifth class in 1986. In 1993 there were 11 students, four became doctors, four became engineers. Then came a feeling of satisfaction that I am doing the right thing. I never looked back,” reminiscences Islam who had revolutionized the concept of education among one of  the most unprivileged community  in one of the most backward region in India.

“The motto was to give modern education with moral values in a fully residential system where students from all strata of the society, irrespective of their financial condition, would live, learn and grow together,” adds Islam.

The mission of the institute is to “achieve quality and excellence in the field of education and to support meritorious students who are socio-economically disadvantaged, following the principles of Fairness, Equality, Equity and Transparency.”

The main campus of  Al-Ameen Mission is located at Khalatpur (Udaynarayanpur) in Howrah district of West Bengal. It has 56 branches  spread across 15 districts of the state. It has 12000 residential students now. It also runs residential coaching classes for engineering and medicine aspirants across West  Bengal and in neighboring Assam, Bihar, Jharkhand and Tripura.

The Al-Ameen Mission also has a facility for girls at Khalatpur, Howrah from class fifth to 12th.

Al- Ameen Mission has bagged many awards for their excellent work in the field of education in West Bengal. They have been winners of The Telegraph School Award for Excellence in 2002 & 2009. The Mission has also been awarded The Telegraph School Award for the best academic performance in competitive examinations in the year 2004 and the Certificate of the Honour in the year 2005, 2006 & 2008. In 2018  Mr. M Nurul Islam also  received  the prestigious ” Banga Bhushan Award” from Mamata Banerjee,the  Chief Minister of West Bengal.

The Mission is mostly run by donation and zakat. Muslims throughout the country contribute their zakat to the Mission, which takes care of 25% of seats reserved for poor, destitute and orphans.

A part from education Al-Ameen Mission does charitable works for the Muslim community. It has helped unemployed Muslims with loans and has scholarship programs to help other communities’ needy students.

Al-Ameen gives full financial support up to six months to those needy students of Al-Ameen who get admission in medical colleges.

The Mission has a unique feature of having different fee-structure for the students of different categories depending upon their financial conditions. The students from well to do families pay their fees in full whereas remittance is given to those who can’t pay the full amount. Those, who can’t pay at all, are exempted of all kinds of fees. Moreover, a considerable number of seats are reserved for meritorious orphan students.

The flexible fee –structure of the Mission had made it possible for many students from most poor background to achieve their dream and become doctors and engineers.

Most surprisingly 105 students from Murshidabad and  80 from Malda who were enrolled in different branches of Al-Ameen Mission among those who cracked NEET this year.

This year in February Al-Ameen Mission Trust has taken up a new project, ‘Al-Ameen Mission Institute for Education Research and Training’. This foundation stone of the institute has been laid in the Newtown. Here, under one roof there will be facilities to provide coaching for the Medical post-graduation course and Residential Training Centre for competitive examinations like IIT,IIM, CLAT,CAT,MAT,UPSC and WBCS. Besides, there will be facilities to train teachers as well as non-teaching staff. Moreover, there would be provision for higher research in different fields of social sciences. In future , it will be the leading center of the Al-Ameen Mission; the Centre  of Excellence, said Islam about his future plan. 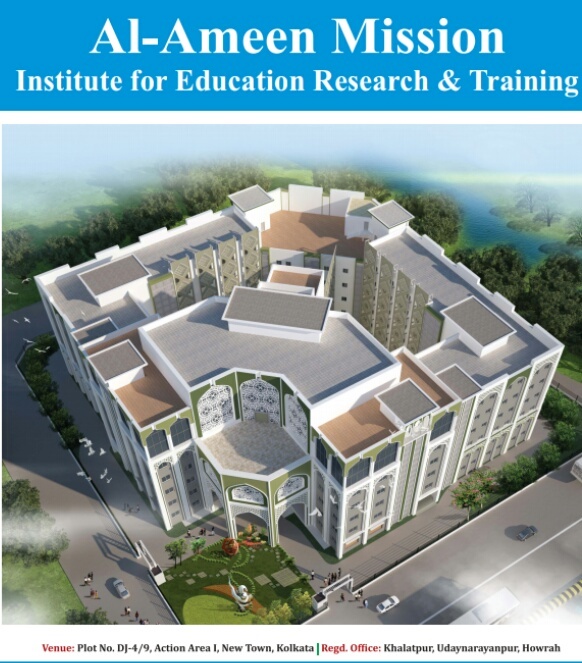 Poverty couldn’t rob of their dream to become doctors, thanks to Al- Ameen Mission