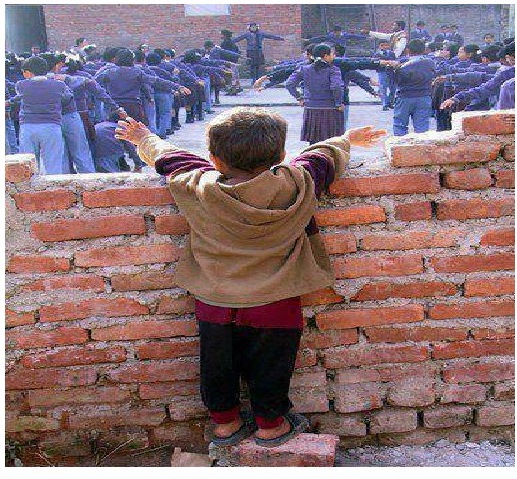 With every election season, community sympathisers, politicians of all hues (except a certain ones with a dominant hue) and the Muslims themselves start to ponder over the economic and social situation of the Muslims in India.

Muslims in India numbering 172 million is the majority community besides being the third largest Muslim population in the world, after Malaysia and Indonesia.

If 71 years after the independence, we are forced to still ponder over these issues, then it speaks a lot about the real situation of the Muslims in India. But the moot question is who is responsible for this sorry state of affairs of the community, the rulers or Muslims themselves.

The educational backwardness of the Muslim community in India has been established and highlighted by a number of officials report such as the Gopal Singh Minority Panel Report, the reports of the 43rd Round and the 55th Round of the National Sample Survey, and the programme of action under the New Education Policy (1986) and NEP revised (1992) and Sachar Committee (2006). The various schemes launched by government to ameliorate the economic and educational condition of Muslims have remained mostly on papers, the benefits of various government schemes, aimed at improving the socio-economic condition of the weaker sections of society, have not accrued to Muslims in any significant measure.

Let’s not get into what the various governments over the years did or did not for the Muslims of India. Instead, I would like to focus on the issue as seen by an Indian Muslim and where the community has failed itself.

Various government reports indicate that about 4% of Muslims children go to Madrassa, the rest 96% study in state-run or privately run schools across India.

We need to focus on the fate and quality of these 96% Muslim students. Over the years aspirational values of every community in India has risen and everyone want their child to be educated in an English-medium school.

In my travels throughout India, across various states and small towns and cities, I have witnessed initiatives by local educationists or entrepreneurs who have established small English-medium schools up to 5th or 8th class across India. These schools, which charge modest to medium fees, do provide the elementary education to a large number of Muslims. But the question is what happens when they finish their class Vth or VIIIth. How many of them continue their education and at which institutes.

Once these students finish their early schooling, a minority of them shifts to the government-run schools and the majority leaves the education system. This is attributed to the economic condition of the parents, as the aspiration is there but they don’t have the means to afford the educational expenses of their wards and instead, prefer the children to be employed so as to contribute something to the family kitty.

As a community, have we been able to establish a chain of schools across India, which follows a common pedagogical approach and where quality education is provided either free of cost or at the minimal rate? The answer is a big NO.

Another strange fact is that every big Indian city can boast of at least one or two Muslim-run schools, in existence for a very long time. But most of these schools provide education in Urdu medium or Hindi medium, and then the pedagogical quality is also questionable.

So who is responsible for the sorry state of the educational fortunes of the community? Community leaders or the religious leaders. A quick and forthright answer to that would be, both.

The religious leaders of the community have to use their influence to convey the message to every Muslim, that education is the only route, which would lead them to their economic and social emancipation. Along with this, they’ll also need to take initiatives to use the money generated within the community as Zakat or Fitr to contribute to establishing chains of educational institutes across India, to provide affordable and approachable education.

Secondly, the community leaders will have to form organisations or an understanding of what form their social endeavours should be, they should, supported by religious scholars, try to initiate a educational renaissance for the community from the grassroots madrassa or school to the higher schools, colleges, universities and technical institutes. And their aim should not be to become centres of money making.

Another fact to note here is that this thinking seems to be happening in southern India, but the Muslims of north India and particularly in the most populous states of UP and Bihar, seem to suffer from an internal competition. In south India various groups have pooled their resources together but in the north everyone wants to start their own venture instead of coming together and forming a mutually beneficial partnership.

What is needed is to establish first, a common, up-to-date and current syllabus, which is taught across schools established or managed by the community, on the pattern of initiatives taken by other communities in India. Hand holding the students and their parents throughout the school years and afterwards counselling them as to what is the best route for their ward, skills or academics. Only then the community could come out of the clutches of these so called community and religious leaders.