There is a spurt in burning the effigies of PM Naredndra Modi, not by the nine-months protesting farmers, against the tyrannical three anti-farmers laws, but in a neighbour country Nepal, which is ostensibly called as a ‘friendly and also brotherly’ nation-owing to its Hindu population! So much so have been the burning-spree that Nepal government had issued a warning to the Nepali protestors or else face the action.

The latest conflagration came out in the open on September 5 , reported by News Tree that Nepal government had to make a stern warning if it is done again as People burnt effigy of PM Modi. ‘The Home Ministry ( of Nepal) said that Nepal has a long tradition of resolving disputes with neighboring countries through diplomatic means and mutual dialogue. The Nepal government on Sunday warned its citizens not to commit any “reprehensible and degrading” act that could harm the honor of friendly countries. The Nepal government has given this warning after the incident of some people burning an effigy of Prime Minister Narendra Modi during the demonstration in the country. A statement issued by the Ministry of Home Affairs of Nepal said that in the last few days, “slogans, demonstrations and burning of effigies in protest to tarnish the image of the Prime Minister of the friendly country have come to the fore”. This strong statement of the Nepal government came after some student and youth organizations affiliated to the ruling coalition and opposition parties burnt an effigy of Prime Minister Narendra Modi in July in protest against the drowning of a Nepali youth while crossing the Mahakali river on the border with India.

What had triggered the protests was that ‘Jai Singh Dhami, 33, of Beas Rural Municipality, is said to have been crossing the Mahakali river via a temporary ropeway but jumped into the river after seeing Sashastra Seema Bal personnel guarding the Indo-Nepal border. Officials in India said that Dhami was illegally coming from Dharchula in Nepal to Gasku in Pithoragarh district of Uttarakhand state of India. The Nepali Investigative Committee, which is probing the case, said in its report that the incident took place in the presence of Indian security personnel.’

Not very far back, there had been protests on May 19, last year, as was reported by Alamy Stock Photo, that Nepali students were angry over the decision of the government of India to open the link road to ‘Mansarovar that passes through an area between Nepal and India’. Police had ‘detained students who came to burn the effigy of Indian Prime Minister Narendra Modi’. Surprisingly, the protests came even as COVID-19 ravaged through.

The chorus against Modi in Nepal has spilled out on the streets, and of course, there is no such reportage in our nation, as after all the mainstream media has all its priorities well defined. But, perhaps, for any onlooker of international politics and relations, the effigy of an Indian PM getting-burnt in a foreign land, that too at such an unprecedented scale, has never happened. The scale of Modi-effigy-burning is so high, that the government of Nepal, started to feel apprehensive of its ties with the government of India which may even go-strained.

India in the last few years, more particularly, after 2014, has made a shamble of its foreign policy and there is without any exception now that India’s relations with any of its neighbour are not strained. It has been locked with a border-dispute with Nepal which seemingly had nice relations with India. No wonder, BJP own MP Subramanian Swamy has lambasted the Modi run BJP foreign policy, as according to New Indian Express  , he ‘questioned the efficacy of India’s foreign policies which according to him are a “mess” due to EAM S Jaishankar and National Security Advisor Ajit Doval’s decisions. “Will the bureaucrat duo Jaishankar and Doval ever apologise to the nation for the mess they have landed India in the international scene? They were given a free hand because Modi trusts politicians not peer level politicians. Now we in a mess with all our neighbours.’’’ He also had averred that Modi is not the king of India.

It may also be referred that Narendra Modi while on his last visit to Bangladesh, had to face one of the biggest protests abroad as around 12 persons had reportedly died, as was reported by BBC  that ‘Modi is a polarising figure both at home and abroad. His government, led by the Hindu nationalist Bharatiya Janata Party (BJP), has often been accused of pursuing policies that target Muslim minorities, and not doing enough to curb violence against them. His contentious image appears to have sparked the protests in the capital Dhaka – and the violence that followed no doubt was an embarrassment to both countries. It also casts a shadow on what has always been an amicable relationship between India and Bangladesh.’

It is now an open fact as to how India has been found napping, in the wake of the developments from Afghanistan and how tumultuous has had been the relations with Pakistan. Sri Lanka too has signaled to straddle past India in its zest for Chinese investments. Bangladesh has started to tilt for investments from China and even in the tiny Maldives, there has been a growing clamour of ‘India Out’ campaign. In fact the voices against Modi, had been echoing in Maldives for quite some time, as when Modi made ‘his first visit’, post-his second term, to get to Maldives highest honour ‘Nishan-Izzuddin’, and no sooner he addressed the Maldivian parliament, Maldivian MP Ahmed Thoriq boycotted and left for outside “to protest the harassment and inhumane actions committed against Muslims in India” something which Thoriq had announced before Modi’s arrival, had informed Maldives Independent . 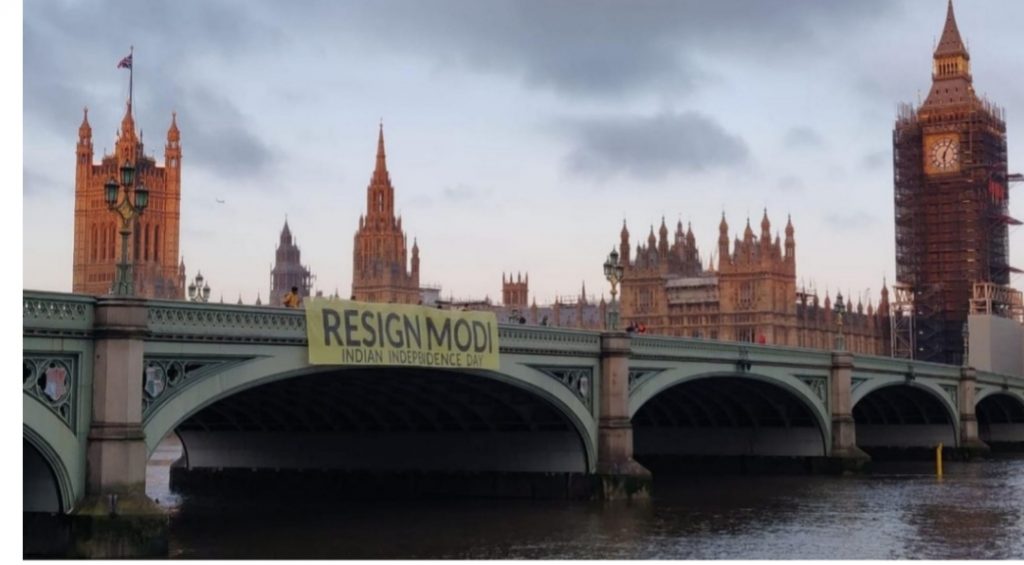 No wonder, owing to the external and internal politics, which is all is complete disarray, Indian Diaspora sought it through a banner from Westminster Bridge to make ‘Resign Modi’ that too on August 15 when India celebrated its 75th independence day. Meanwhile, in Nepal where memories of Indian economic blockades of (1989 & 2015) are fresh, there are reports that Indian helicopters have violated the Nepali airspace which prompted the Nepal government to send a diplomatic note to India. Will the things escalate between Nepal and India is time would tell, but Nepal knows it well that India badly needs its waters and that Indians send billions of rupees from Nepal as remittances. Does India need Nepal more or vice-versa?