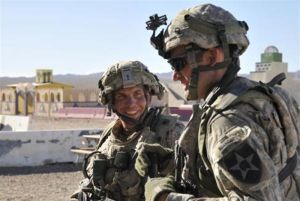 It was first declared by US that it was to withdraw from Afghanistan by September 11 and later on until July 4 but now finally it has been learnt that US is not going to completely withdraw its forces and will station around 1000 of its soldiers permanently in Afghanistan, according to Edition. CNN on June 30  ‘US days from completing formal Afghanistan withdrawal but up to 1,000 troops could remain. As many as 1,000 US troops could remain in the country after the formal withdrawal to assist in securing the US Embassy in Kabul and the city’s airport, a senior administration official told CNN, and it is now unclear how long NATO troops will remain. US officials say there were some 2,500 US troops in Afghanistan, plus hundreds of additional special forces who are not publicly acknowledged, when US President Joseph Biden made his decision in April to withdraw them.’

The Afghan Taliban (AT) who are battling with Afghanistan President Ashraf Ghani for power have taken an exception to US stand and have sought that need to comply with the Doha Agreement in totality.  It has been reported by BBC on July 4  that AT spokesperson in Doha, Suhail Shaheen said that ‘they would ‘react’ to any continuing international military presence in Afghanistan. Speaking to the BBC from their political office in Doha, he said that their leadership would decide what form that would take.  Mr Shaheen told that agreement had been reached with the United States, during peace talks in Qatar, for a complete withdrawal of all international forces from the country’.

If Suhail Shaheen can be put plainly it would mean that an ensuing war between AT and USA is still round the corner, in immediate post-September 11 scenario, while Ghani forces have already launched a battle against AT. This is obviously going to make a hard time for Pakistan, as if it allows its airspace to  be used by US to attack AT or permits any military base to be used against AT, it will be going to invite a retribution by AT. But, Pakistan PM Imran Khan has conveyed ‘absolutely not’ message to USA and disallowed any prospects of a military base to be used by US. This has baffled US and it is trying to groom a military base in Uzbekistan or in Tajikistan at the earliest. US Defense Secretary Lloyd Austin met Uzbekistan Foreign Minister Abdul Aziz Kamilov on July 1  and US Secretary of State Antony Blinkin met Tajikistan Sirojiddin on the same day 4. But, as yet there hasn’t been any success coming to the US side as the Central Asian republics does not want to antagonize Russia which does not want a US military  base in its neighbor for the balance of power.

No wonder Wall Street Journal on May 8 5 had speculated that, ‘U.S. military commanders want bases for troops, drones, bombers and artillery to shore up the Afghan government, keep the Taliban insurgency in check and monitor other extremists. Options being assessed range from nearby countries to more distant Arab Gulf emirates and Navy ships at sea, U.S. government and military officials said. Preferable, according to some military and Biden administration officials, would be Uzbekistan and Tajikistan, which border Afghanistan and would allow for quick access. But Russia’s large military footprint in the region, China’s growing one and tensions between them and Washington complicate plans for Central Asian bases, the officials said. “The drive to work looks like it will be a little bit longer for now,” one official said.’

There does seem to be an ‘absolute-turn’ in Pakistan foreign policy vis a vis US, as Pakistan is also likely to ‘put on hold’ the agreements of US and the erstwhile Pervez Musharraf government, which will mean no availability of Pakistan air space for US and NATO would be disallowed to carry out its equipment etc via Pakistan and no room for US ground forces to work from inside Pakistan. When Pakistan is now to decide on ‘such-terms’ there is no ‘way-out’ for US except to decide to stay its 1000 troops inside Afghanistan which is a signal for a war on Pakistan as US is not able to see Pakistan policy independent of US. It has only three days back imposed Child Soldiers Prevention Act (CSPA) on Pakistan along with Turkey.

The unfolding scenario is that AT is all to set to ‘take-on-to-terms’ with US forces after September 11 and with US having left Bagram military base it leaves only Pakistan from where US would try to maneuver but Pakistan does not seem to relent.  How would then US safeguard its 1000 army men? If Pakistan succumbs to US it will invite attacks by AT. US perhaps has thus decided to entangle Pakistan in this turmoil,  as when it would fly its drones/ fighter jets violating Pakistan airspace, from its bases in Gulf, it will invite a reaction, and thus,  a war with Pakistan is what US is now itching for.

US is not likely to make Afghanistan have any peace as it never wants to abandon it. US has already put into order around 25,000 Blackwaters private militias to create havoc inside Afghanistan once after it leaves, according to the MEMRI report published on January 16, 2019 6 and also that US is likely to seek Indian support into pinning Pakistan, as Indian CDS Bipin Rawat has declared on July 3, that India is to retaliate against Pakistan on the ‘time and place’ of its choosing after the attack on Jammu Air Force station on June 27.

When US and Pakistan will be at loggerheads India will try to take full advantage and extract its revenge from Pakistan and US would attack Pakistan from inside Afghanistan, hence, Pakistan is most likely to face the prospects of a two-front-war! In such a scenario China the bête noir of US and India alike is likely to come forward to Pakistan rescue. How the situation is likely to unfold is for the time to see but a war in the Himalayas is what tends to be the only gaining probability. The scary doom for the world is into waiting as this time all the players are also nuclearly-armed.

Will US evacuate Afghanistan fully? Perhaps not!