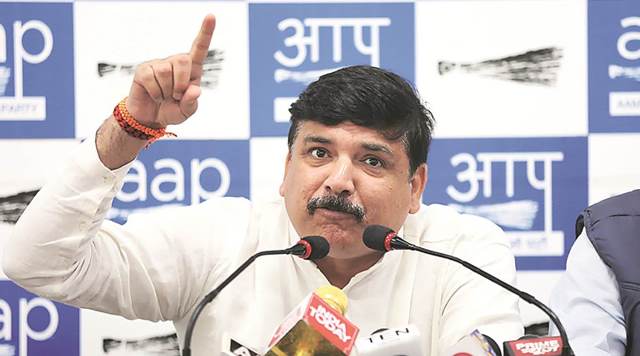 NEW DELHI:   Taking the serious note conversion of Dalits  to Buddhism,   Aam Aadmi Party (AAP) senior leaders on Friday slammed  UP CM  Yogi Adityanath government for ‘disrespecting and torturing’ the people of Valmiki community.  They said instead of expressing sympathy for Valmiki people, the BJP is calling them ‘terrorists’.

“We are extremely worried about the ongoing circumstances in Uttar Pradesh. And it is quite evident that the Chief Minister of UP, Shri Yogi Adityanath wants to ignite riots and violence based on caste and creed. He is trying to divide the society.”

After the 19 year girl’s gangrape and murder in Hathras,   236 people from the Valmiki community have converted into Buddhism in Ghaziabad.

Reacting on this, AAP leader Singh said “we will stand behind the Valmiki community as they do not need to convert”.  I have written a letter to the Prime Minister citing all the incidents happening in UP and have demanded immediate intervention from him, he added.

“In Ballia, a BJP leader killed a person from the Pal community. This happened in front of the CO, SDM and police. The whole government was involved in saving the killer. The UP government is also engaged in protecting the accused of Hathras,” he underlined.

He said in Lucknow people were insulted, and troubled.

“I spoke to almost everyone in Lucknow, tweeted on social media asking about the reason behind keeping an innocent Dalit in lockup. But did not receive any response.  Yogi Adityanath, dragging a Dalit handicapped into a police station is not the identity of the Thakurs. You are a tyrannical and unjust CM and it is watching the entire UP.”

“Today, due to the working of Yogi Adityanath, there is a great danger in Hinduism.”

He further said, “BJP is accusing Dalits of associating with terrorists and ISI and alleging they took bribes for conversions. CM Yogi and his party members should be ashamed of themselves and their activities that have forced people to give up Hinduism.”

Adding to this, Gautam said, “It is very unfortunate that the true character of the BJP, which is based on caste creed and class, is now exposed.

Calling Ambedkar, the grandchild of Baba Saheb Ambedkar, as the apprentice of Dawood Ibrahim and is charging money to convert the religion of the people is an insult to the people of Dalit community, he said.

The kind of language used by the BJP leaders and MLAs against Dalits and OBCs will not be tolerated, he said.

“I think this is the end of the BJP and the people of all backward classes and the Davits have decided to oust the BJP from the country. The Dalit community will fight for their honour and integrity and they will not bear this insult and teach the BJP a lesson.”

Rakhi Birla said,”To hide its failures and its own faults, the BJP is resorting to calling the Dalits as terrorists and ISI agents”.

She said, “The Dalit community of the country is watching, and Yogi Adityanath or Ajay Mohan Bisht, who is standing with the Thakur community while they continue assaulting the women and lower castes”.