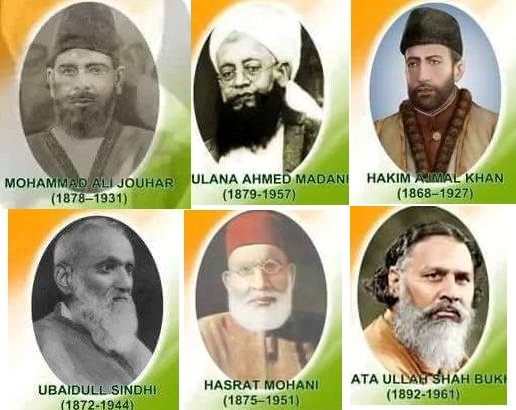 The freedom which we attained on 15th August 1947 was result of a long struggle which involved contributions and sacrifices of men and women of all classes and communities of India.

While freedom fighters like Bhagat Singh, Subhash Chandra Bose and Mahatma Gandhi rightly get their share of credit, the contribution made by Ulema (Muslim clerics/scholars) in India’s freedom struggle is largely ignored.

After the revolt of 1857(credited as India’s first war of independence) failed the Ulema who were a leading force of the revolt became the main target of British persecution. A total of 200,000 men and women were martyred at the time. Of these about 51,200 were Ulema. 500 of these Ulema were hanged in Delhi.

Twenty years after India’s first war of Independence, Shaikhul Hind Maulana Mahmoodul Hasan in 1877 formed ‘Samratut Tarbiyat’ whose aim was to prepare for armed insurrection against the British. This organization struggled against British for almost three decades and in 1909 it was reorganized under the name of Jamiatul Ansaar and Maulana Obaidullah Sindhi took charge of it.

In 1913 after the ban of  Jamiatul Ansar,  Nazzaaratul Ma’arif was formed to drive away the British colonists. The same year saw a freedom movement which came to be known as the Silk Letter Movement or Reshmi Rumal Tehreek under the leader ship of Ulema like  Shaikhul Hind Maulana Mahmoodul Hasan, Maulana Obaidullah Sindhi and Maulana Abul Kalam Azaad. The movement aimed to liberate India from British rule with the help of  Turkey, Imperial Germany, and Afghanistan.

However Reshmi Rumaal Tehreek got exposed to the British rule with the capture of letters written by Maulana  Ubaidullah Sindhi on silk cloth in 1916. In the aftermath of its failure 222 Ulema were arrested all over India by the British.

The leading Ulema of this attempt for India’s liberation Maulana Mehmood Hasan and his comrades Maulana Waheed Ahamad Faizabadi, Maulana Azeez Gul, Hakim Syeed Nusrat Hussain and Maulana Hussain Ahmad Madni were arrested in Makkah and sent to Malta where they remained incarcerated for long periods.

It is an almost forgotten fact that at a time when many Indians were supporting the British and Indian National Congress was demanding partial freedom, Jamiat Ulema-e-Hind had dared to raise demand complete freedom for India.

The demand was raised in January 1924 by Maulana Syed Hussain Ahmad Madni in Cocanada and in March 1926 a resolution to this effect was passed for the first time in Calcutta.

In 1928 Jamiat opposed the ‘Nehru Report’ that sought autonomy under the British rule as it was against Jamiat’s demand for complete freedom. It stopped its support to Congress just because of this reason till 1929. It was in the famous Lahore session of Indian National Congress in December 1929 that Congress voted in favour of Jamiat and adopted the demand for complete freedom for India, 5 years after the Ulema body had originally raised it.

The Jamiat had also initiated the opposition to Simon Commission with full strength in 1926 which was subsequently adopted by Congress in 1927. Eventually Simon Commission had to return to Britian unsuccessful.

At laest two prominent Ulema were arrested the following yaer during the Civil Disobedience Movemnet.

In 1940 Maulana Hussain Ahmad Madni once again raised the issue of complete independence for India at Bachhraon. For that he faced a six month imprisonment after being arrested on his way to Unity Conference.

The  Ulema body passed the  resolution of ‘Quit India’ on August 5, 1942, followed by Congress passing the same resolution on August 9 during Bombay session. It led to arrest and long incarceration of many Congress leaders and Ulema.

This body of Ulema strongly opposed the two-nation theory and the idea of Pakistan. Soon Jamiat faced a split and a section sided with Muslim League. In the process Maulana Hussain Ahmad Madni and Maulana Azad became victims of Muslim League violence which had become politically very strong by 1945. Many other Ulema faced harassment throughout India.

Though the country ultimately became divided on communal lines, we should never forget the sacrifices and struggles of men and women who lived, fought and died for undivided India.

A British army general Tomson, a who fought against Muslims in the 1857 revolt, wrote in his memoir titled Rebellion Clerics:

“If to fight for one’s country, plan  and mastermind wars against occupying mighty powers are patriotism, then undoubtedly maulvis (read Ulama ) were the loyal patriots to their country and their succeeding generations will remember them as heroes”.