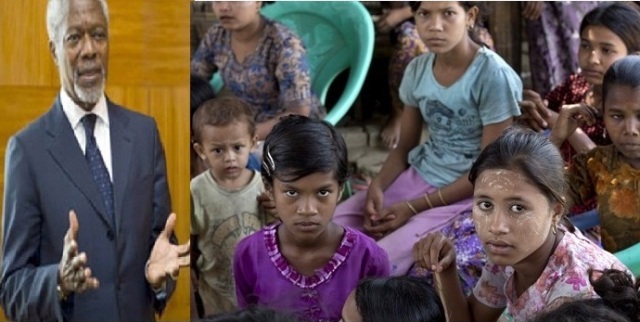 YANGON, Myanmar : According to a report published by Associated Press Myanmar’s government has set up an advisory panel headed by former U.N. Secretary General Kofi Annan to find “lasting solutions” to the conflict in Rakhine state, where human rights groups have documented widespread abuses against the minority Rohingya Muslims.

As per a statement issued on Tuesday by the office of State Counselor Aung San Suu Kyi an agreement is due to be signed between her office and the Kofi Annan Foundation to set up a nine-member advisory commission to resolve “protracted issues in the region.”

Kofi Annan has said that he is “pleased to support the national efforts to promote peace, reconciliation and development in Rakhine.”

“I look forward to listening to the leaders and people of Rakhine and to working with the State and central authorities to ensure a more secure and prosperous future for all,” Annan said.

As stated on the website of the Kofi Annan foundation which will assist the commission it’s mission is to provide leadership to mobilize “political will to overcome threats to peace, development and human rights.”

The commission which will comprise of three international and six national experts will convene its first meeting on Sept. 5 in Yangon, Myanmar and submit its final report and recommendations to the Myanmar government in the second half of 2017.

In 2012 more than 100 people most of whom were Rohingya were killed in clashes with Buddhists. Many managed to flee to other South Asian countries while many perished or became victims of human trafficking. Many displaced Rohingya are currently living in desperate conditions in refugee camps with little medical care.

The commission’s recommendations will be given to Suu Kyi.—-with inputs from AP