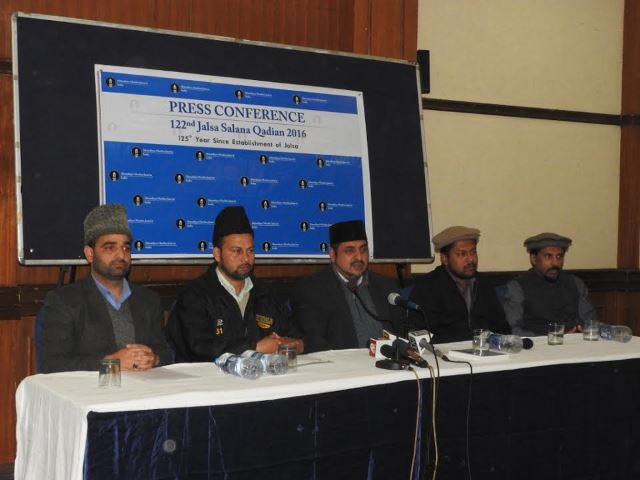 New Delhi: There are around 1.5 lakh Qadianis in India and they are active in Jammu and Kashmir, West Bengal, Odisha, Tamil Nadu, Andhra Pradesh   and other parts of the country. This was stated by Shriaz Ahmad Addl Chief Secretary Ahmadiyya “Muslim” Community while addressing media persons here on Tuesday regarding its 122nd Jalsa Salana (Annual Convention) at its headquarter in Qadian, Dist. Gurdaspur, Punjab on 26th to 28th December 2016.

Facing a volley of questions from the journalists present in the Press Conference, Ahmadiyya Spokesman Tariq Ahmad admitted that their sect regards Mirza Ghulam Ahmad of Qadian as their ‘Prophet’ and ‘Promised Messiah’.

When pointed out that because of deviation from the Islamic faith and belief, Ahmadiyyas were declared non-Muslims in across the Islamic world  as well as  in South Africa, he claimed that only Pakistan declared Ahmadiyyas as Non-Muslims and adding that “ the Qur’an prophecied  the advent of a Messiah. When asked which Ayah states this? He started misinterpreting the Surah An-Nisaa’s certain Ayahs.

The spokesperson and other members sitting on the dais beseeched the Muslim journalists not to ask such questions as they called the meeting for highlighting Ahmadiyya Annual convention.

However, when one reporter asked do you support Uniform Civil Code? Replying in nod, the spokesperson said the Ahmadiyya community’s headquarter in Britain and they follow the civil code of that country.

“We have no problem if UCC is implemented in India as we always follow and abide the laws of the country.” He also supported government’s move on triple talaq.

It would be worth mentioning that the founder of Qadiani sect Mirza Ghulam Ahmad had called advent of British raj in India as invaluable blessing.

“The night of the Sikh rule has been followed by the day of British dominion which has brought us the invaluable blessing of peace. The truth is that if regard is had to the general peace and security prevailing in the country and to the comforts which we can and do enjoy, it is unjust to compare the days of Sikh rule with even the nights of British Government. The time in which we live is a time of physical as well as spiritual blessings, and what has already appeared is a sign of the richness of the harvest that we may yet reap.” (The Promised Messiah by Mirza Ghulam Ahmad, and taken from the September 1904 issue of the Review of Religions (Vol.3, No.9).

On the annual Jalsa, the spokesperson said, “Its objective is to present the pure, pristine and peaceful teachings of Islam”.

“The Ahmadiyya Muslim Community spans over 209 countries of the World. Members of the community from most of these countries participate in this Jalsa held at Qadian”, he added.