‘I made worlds’ smallest electric iron when I was in class 5th but I failed in the school examination. When I came back to home I was disappointed and sad,  now  you see  worlds’ top universities invite me to deliver lectures’ reveals Wajid Khan in a candid conversation with Syed Zubair Ahmad.

A boy left his home at the age fourteen in quest of a better life. During the years that followed, he experienced life sleeping on footpath, selling old clothes and being an auto-rickshaw driver.

He is now in his mid-thirties. His name features in Guinness Book of World Records ,Limca Book of Records , and Asia Book of Records . He has got three awards at the hands of former President APJ Abdul Kalam. And his work is a part of Rashtrapati Bhavan. To add to the list he has in his hand a unique design assignment for FIFA World Cup 2022 to be held in Qatar.

This incredible story belongs to Wajid Khan who was born to a farmer family on 10 March, 1981, in a small village of Songari in Mandsaur district of Madhya Pradesh. His extraordinary talents came to forth when he developed world’s smallest electric iron while studying in 5th standard which featured in Guinness Book of World Records.

In a candid interview with MuslimMirror.com Khan revealed “I made worlds’ smallest electric iron when I was in class 5th but I failed in the school examination. When I came back to home I was disappointed and sad. There was a family dispute between by mother and father and I was living in my maternal home. My mother thought I couldn’t continue my study due to family problems. But she believed in me and she was very confident that could achieve something big in my life.  She gave me 1300 rupees and said ‘move from here and live you own life and achieve your goal.’ I went to Ahmadabad purchased old clothes and started selling them on the streets”. 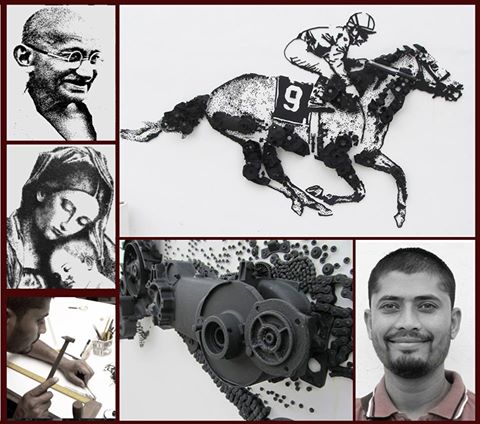 “Now you see I am a 5th standard fail but worlds’ top universities invite me to deliver lectures” said Khan who went on to do 200 inventions along with playing rugby and doing animation.

Khan has been the General Secretary of Indian Rugby Football Union and a painting done by him on canvas is probably world’s first 3D painting.

But it is nail art which has brought him greatest laurels and prominence. As a nail artist he makes images by hammering nails into hard acrylic/PVC sheets and owns a patent for this form of art.

His first nail art, a portrait of Mahatma Gandhi completed in 2005 took three years of hard work. Practice makes a man perfect and now making a nail portrait is a matter of 3-6 months for him.

His nail portrait of Dhirubhai Ambani was over-looked by Anil Ambani who thought that it was a sketch. When Anil Ambani came to know that it was an extraordinary form of artwork done in nails by Wajid Khan, he got the contact no of Wajid Khan and called him immediately.

Not just nails, Wajid Khan’s talent lies in making art from any material. He has created art works from automobile junks gathered from junkyards and also from medical equipments and other mundane stuff like spoons.

In 2014 a crying female child made by him using medical equipments became part of ‘Save Girl Child’ campaign and in June of 2016 Wajid Khan painted dried up street trees in Indore  to mark the World Environment Day.

Wajid  Khan has accomplished a lot at a young age and much appreciation and recognition has come his way. But it is the appreciation and encouragement from Late APJ Abdul Kalam with whom he got to spend time at National Innovation Foundation which he treasures most.

During a candid conversation when I asked Wajid Khan what made him choose nails to express himself, he replied: “I had no resources to chase my dream and do something extraordinary. All I could get easily were nails and plywood so I tried my imagination on them, now the result is before you. If you got the passion to achieve something in life nothing can stop you, this is my ‘Mantra of Life’.”

Khan has a special interest in underprivileged and oppressed which probably stems from himself having experienced life in various hues.

He also took upon himself to pass on spoon art to underprivileged children free of cost in order to enable them to earn a living through it.

“I am supposed to get Rs 200cr from the FIFA assignment and I am planning to donate that for the betterment of deprived and underprivileged children. ” he said.

“God has given me this talent. I want to use it for the uplift of society. And I want to use the artwork to bring a change in the society” said Wajid about his future plans.

Wajid Khan can be contacted at : wajidart@gmail.com. Facebook page https://www.facebook.com/WajidKhanArt/