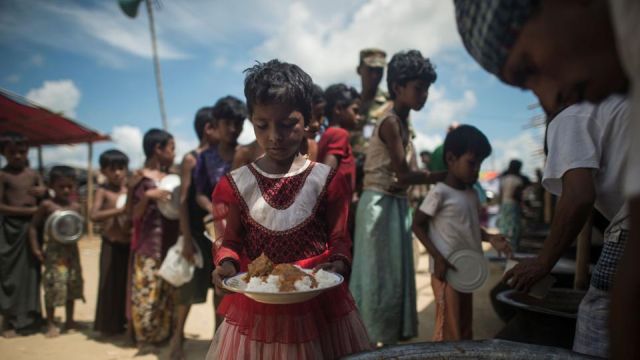 Dhaka : Bangladeshi immigration authorities have registered more than a million Rohingyas — or around 95 per cent of the estimated Muslim minority members living in refugee camps in the country, an official said on Wednesday.

The Bangladeshi authorities began a registration process for Rohingyas in Cox’s Bazar district in southeastern Bangladesh and the main point of arrival for Rohingya refugees on September 11 after the violence in Myanmar in late August triggered the recent exodus of the Muslim minority, Efe news reported.

“As of Tuesday we have registered 1,004,782 Rohingyas. Our works are at the final stage as we have almost 95 per cent Rohingyas now,” said Abu Noman Mohammad Zakir Hossain, Deputy Director of Bangladesh’s Passport and Immigration Department.

“When we started the work, our primary goal was so that no Rohingya can take Bangladeshi passport. Now we found this information could be useful in other works like relief operation and repatriation,” said Hossain.

Information included in the registration includes a name, a family’s name, an address in Myanmar and a person’s fingerprints, Hossain added.

Bangladeshi authorities recognized some over 30,000 Rohingyas as refugees shortly before the onset of the latest round of crisis.

The governments of Bangladesh and Myanmar agreed that the repatriation process of Rohingya refugees in Bangladeshi territory will be completed within two years from the date it begins.

The current Rohingya exodus began when Myanmar’s security forces launched a campaign in late August in response to the Rohingya rebels’ attacks on security posts in Rakhine, home to an estimated one million members of the Muslim minority not recognized by the Myanmar authorities.

The UN and various human rights organisations have said there is clear evidence of rights abuses in Myanmar, with the UN High Commissioner for Human Rights calling the Army’s operations “ethnic cleansing” and saying there were indications of “genocide”.