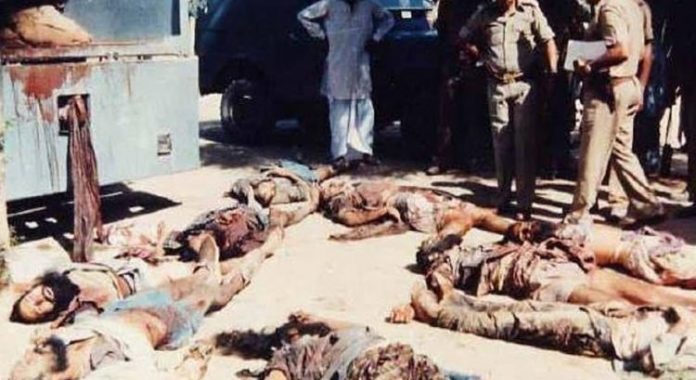 inssan abhee tak zinda hae, zinda hone per sharminda hae!
Human beings are still alive; they are ashamed to be alive! [Shahid Nadeem’s Urdu couplet on the silence of the civil society against communal violence. He received forty lashes for writing and singing these lines by the Zia regime in Pakistan]

For almost last four decades, on every anniversary of the horrific 1984 massacre of Sikhs in India, this author has been reminding the Nation how Indian State and judiciary did not bother to punish the perpetrators of this horrendous mass killing of the innocents of the second largest religious minority of our country. On every anniversary the author hoped that now justice would be done and he would not have to write the painful story once again as a reminder. It has not happened in year 2020 also; the saga of the criminal betrayal by the Indian Republic has no end and author like the victims continues to cry before a deaf and dumb Indian State. However, the shameless Indian State with the 37th anniversary approaching made noises as if it was working for getting justice to the victims, like in the past! The National Minority Commission was kind enough to issue notices on October 30, 2021to Delhi, Jharkhand, Orissa, West Bengal, Bihar, Haryana, Jammu and Kashmir and Himachal Pradesh “to file reports with the Commission detailing the victims, compensation paid so far and arrests and action taken against the accused in these cases”.

Earlier, in January 2021, the UP government told the nation that a “Special Investigation Team (SIT) set up by the Yogi Adityanath government to probe cases related to the 1984 anti-Sikh riots in Kanpur has claimed to have collected evidence of murder and arson from a house in the district’s Naubasta area where two people were killed and set ablaze [in 1984]”.

It took Indian State only 37 years to achieve these two goals in search for the killers of 1984.]

Whenever the country witnesses the large-scale violence against the minorities and Dalits, the search for perpetrators continues endlessly and the criminals are never punished. Major incidents of violence against minorities like Nellie massacre (1983), Sikh massacre (1984), Hashimpura custodial massacre of Muslim youth (1987), pre/post- Ayodhya mosque demolition violence against Muslims (1990-92), Gujarat carnage (2002) and Kandhmal cleansing of Christians (2008) are testimony to this reality. But when the victims are Dalits or minorities no such urgency is shown. In such cases Indian State is fond of playing commission-commission. Commissions after commissions would be constituted to see that the heinous crimes disappear from the public memory. The horrendous massacre of Sikhs in different parts of India in 1984 is a living testimony of this criminal attitude of the Indian justice system.

The status of anti-Dalit violence is no different. The major incidents of persecution and massacre of Dalits; 1968 Kilvenmani massacre, 1997 Melavalavu massacre, 2013 Marakkanam anti-Dalit violence, 2012 Dharmapuri anti- Dalit violence (all in Tamil Nadu), 1985 Karamchedu massacre, 1991 Tsundur massacre (all in AP), 1996 Bathani Tola Massacre, 1997 Laxmanpur Bathe massacre (all in Bihar), 1997 Ramabai killings, Mumbai, 2006 Khairlanji massacre, 2014 Javkheda Hatyakand, (all in Maharashtra), 2000 Caste persecution in (Karnataka), 5 Dalits beaten/burnt to death for skinning a dead cow 2006, 2011 killings of Dalits in Mirchpur (all in Haryana), 2015 anti-Dalit violence in Dangawas (Rajasthan) are some of the thousands of incidents of the Dalit persecution. In almost all these cases perpetrators are yet to be identified. Even if identified the prosecution rate never exceeded 20%.

On the other hand, the Dalit, working class and minority ‘perpetrators’ of violence are efficiently put on trial by constituting special investigation teams and punished by fast track courts. In order to meet the end of ‘justice’, ‘national security’ and ‘wish of the society’ they are hanged and jailed. The latest case is from Assam where a court at Jorhat on October 20, 2020 sentenced one person to death and 24 others to life imprisonment for lynching a doctor in a tea estate on August 31, 2019. Dr. Deben Dutta of the Teok Tea Estate Hospital in Jorhat, was beaten to death by workers. They were angry about Dutta’s absence from duty at the hospital where Somra Majhi, a 33-year-old plantation worker of the estate, was admitted in critical condition. By the time the doctor returned around 3.30 pm, Majhi had died. Angry workers then beat Dutta up and locked him in a room where he died. The perpetrators were found and convicted in 14 months’ record time. It is nobody’s case that workers had any right to kill a person whatever would have been the provocation and instigation. But the issue is that when victims are minorities, working class and Dalits the State and judiciary go into coma.

BETRAYAL BY GOVERNMENTS TILL 2014

After giving free run to the killer gangs the government
appointed one man Marwah Commission to find out the perpetrators of the 1984 ‘riots’. As this exercise was proving inconvenient, it was asked to disband itself within short period of its existence and a sitting Supreme Court Judge Ranga Nath Mishra was asked to conduct inquiry into 1984 ‘riots’ who submitted his report in 1987. Shockingly, this fact finding (or fact-hiding) commission headed by Misra observed that
“riots which had a spontaneous origin later attained a channelized method at the hands of gangsters”.
The massacre was reduced to ‘riots’ as if Sikhs equally fought against the others. It was a brazen lie. The ‘apostle of justice’, Mishra, champion of the theory of spontaneity was not, naturally, able to find out from where these gangsters came! According to Jarnail Singh author of the book I Accuse: The Anti-Sikh Violence of 1984 for this service to the State he was awarded a berth in Rajya Sabha.
Next two decades, not less than nine commissions of inquiry were instituted. For Indian State it became a routine to announce constitution of some new commission or some more compensation to the families of victims in order to deflect the mounting anger at the times of elections. Highlighting the anti-minority bias of such commissions, H. S. Phoolka, a renowned lawyer, commented that instead of getting convicted many of the political perpetrators get promoted as rulers.
In the latest development Supreme Court of India on August 16, 2017 ordered the constitution of a panel comprising two of its former judges to examine the justification for closing 241 anti-Sikh riot cases probed by SIT in next 3 months. It is November 2018 (15 months since the order was passed) and these three months are yet to be over!

BETRAYAL BY THE PRESENT RSS/BJP RULERS

RSS claims to have always stood for Hindu-Sikh unity. It
occasionally expresses its gratitude to Sikhism for saving Hinduism from the Muslim aggression. It may not be irrelevant to note here that RSS does not treat Sikhism as independent religion, which discarded Casteism and Brahmanical hegemony, but part of Hinduism. The RSS/BJP leaders blamed Congress for anti-Sikh violence Modi while addressing a public rally during last parliamentary elections at Jhansi, UP (October 25, 2013) asked Congress leaders to explain who “killed thousands of Sikhs in 1984” and “has anyone been convicted for the Sikh genocide so far”. Modi during Punjab elections and 2014 general elections kept on referring to ‘qatl-e-aam’ or genocide of Sikhs.

Modi after becoming PM in a message (October 31, 2014) said that anti-Sikh riots in the aftermath of Indira Gandhi’s assassination were like a, “dagger that pierced through India’s chest…Our own people were murdered, the attack was not on a particular community but on the entire nation.”

Hindutva icon, RSS whole-timer and PM Modi lamented the fact that culprits were yet to be booked and tried for this massacre. However, Modi did not tell the nation what NDA governments which ruled this country from 1998 to
2004 did to persecute the culprits. Modi also forgot to share the fact that as per the autobiography of LK Advani (page 430); it was his Party which forced Indira Gandhi to go for army action infamously named as Operation Blue Star which killed large number of Sikh pilgrims.
Renowned journalist Manoj Mitta, author of the book When a Tree Shook Delhi: The 1984 Carnage and Its Aftermath straight forwardly tells that

“Despite the BJP rule, there has hardly been any will to enforce accountability for the massacres that took place under the Congress. It’s as if there is a tacit deal between the sponsors of 1984 and 2002”.
It was no over-sight that 2019 parliamentary elections 1984 massacre was totally forgotten. This is not what outsiders or critics of the RSS have been telling. The perusal of the contemporary RSS documents show that major focus was on condemning the Sikh extremism, eulogizing Indira Gandhi and welcoming the crowning of Rajiv Gandhi as new prime minister.

The most important proof of such a dehumanized attitude towards the massacre of Sikhs is a document circulated by Nana Deshmukh, a prominent whole timer and ideologue of the RSS [now deceased]. This document titled as ‘MOMENTS OF SOUL SEARCHING’ was circulated by Deshmukh on November 8, 1984, may help in unmasking the whole lot of criminals involved in the massacre of innocent Sikhs who had nothing to do with the killing of Indira Gandhi. This document may also throw light on where the cadres came from, who meticulously organized the killing of Sikhs. Nana Deshmukh in this document is seen outlining the justification of the massacre of the Sikh community in 1984.

This document also shows the true degenerated and fascist attitude of the RSS towards all the minorities of India. The RSS has been arguing that they are against Muslims and Christians because they are the followers of foreign religions. Here we find them justifying the butchering of Sikhs who according to their own categorization happened to be the followers of an indigenous religion. In this document we will hear from the horse’s mouth that the RSS like the then Congress leadership believed that the massacre of the innocent Sikhs was unavoidable.

This document was published in the Hindi Weekly Pratipaksh edited by George Fernandes, who later became Defence Minister of India in the NDA regime, in its edition of November 25, 1984 titled ‘Indira Congress- RSS collusion’ with the following editorial comment:

“The author of the following document is known as an ideologue and policy formulator of the RSS. After the killing of Prime Minister (Indira Gandhi) he distributed this document among prominent politicians. It has a historical significance that is why we have decided to publish it, violating policy of our Weekly. This document highlights the new affinities developing between the Indira Congress and the RSS. We produce here the Hindi translation of the document.”

The original pages of the Hindi Weekly Pratipaksh edited by George Fernandes reproduced.