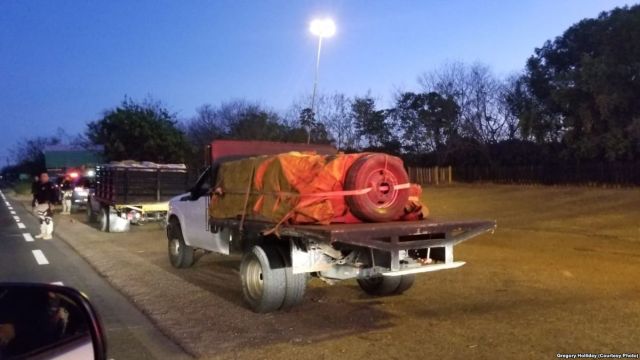 Caracas : The Venezuelan opposition has said that 50 tonnes of humanitarian aid entered the country despite a blockade ordered by the government of Nicolas Maduro, who closed the national borders to prevent the entry of requested donations.

“A part of the loads also entered through other roads and in the week we will show part of that result and where they will arrive and who will be the beneficiaries,” the president of the Commission for Social Development and Integration, Miguel Pizarro, said on Sunday.

The parliamentarian said some “50 tonnes of humanitarian aid” entered the country via two trucks from the south, where Venezuela meets Brazil, and the containers that “remain protected” contain nutritional supplements, medical supplies and hygiene products, Efe news reported.

On the border between Venezuela and Brazil on Saturday, two vehicles waited to enter to the country with donations collected in the state of Roraima, but after hours they were returned.

The trucks loaded with food and medicine were removed “as a precaution” and to “avoid possible conflicts,” Yuretzi Idrogo, Venezuelan Democratic Unity Roundtable deputy in Bolivar state and exiled in Brazil, told Efe.

“The idea is for that aid to enter peacefully and without any violence,” she said, after some groups of protesters threatened to set fire to the gas tanks of the vehicles.

The border between Venezuela and Brazil, as with Colombia, remains closed.

In some of the Venezuelan towns bordering these countries there were riots on Saturday amid the demands of demonstrators to allow the entry of aid donations, which Maduro does not accept as he considers them a pretext to a foreign invasion.

According to the opposition, the population of Santa Elena de Uairen, on the border with Brazil, is “besieged” by “paramilitaries” in connection with the clashes that have left several people dead and injured.

The confrontations there occurred in parallel to those on the border between Venezuela and Colombia, which is also closed and where aid was also expected to enter from the Colombian city of Cucuta.

Urena registered between the morning and afternoon on Sunday at least four confrontations between forces and civilians.

A regional government source told Efe there were about 200 people injured after the riots in the border areas.

The Venezuelan Observatory of Social Conflict NGO said in a preliminary report published on Sunday that it confirmed three deaths “from bullet wounds” all of them in Santa Elena de Uairen.

The NGO said that on Saturday when there were also demonstrations throughout the country to support the entry of foreign aid donations, there were 295 injured “mostly by wounds from firearms, toxic substances and cruel, inhuman or degrading treatment.”