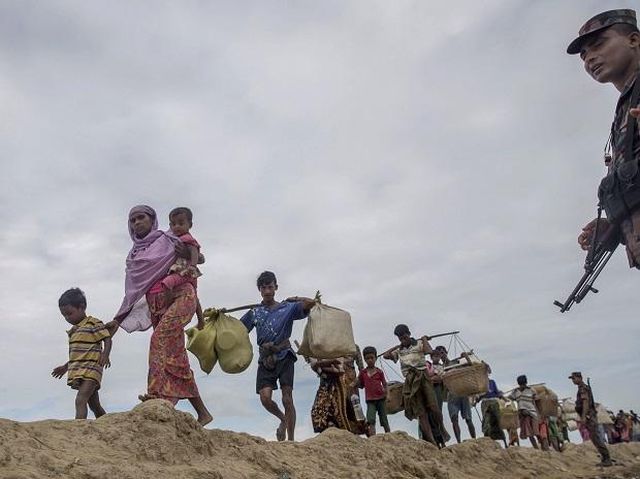 United Nations : Myanmar has said that 508 Hindus are among around 1,000 refugees cleared for the first batch to be repatriated to their homes from Bangladesh.

The list, which also includes 750 Muslims, has been handed over to Bangladesh authorities to “expedite” the process of repatriating refugees now in the neighbouring country, Myanmar’s Permanent Representative Hau Do Suan told the Security Council on Tuesday during a briefing on the situation there on Tuesday.

The repatriation process has not yet started, although he said that it was to have begun on January 23 under an agreement with Bangladesh.

Myanmar has provided Bangladesh side the resettlement plan covering livelihood assistance, access to basic services, and safety arrangement for verified returnees, he added.

The UN High Commissioner for Refugees, Filippo Grandi, however, told the Council that the situation in Myanmar was not yet conducive for the return of refugees.

“An end to violence and destruction of property and granting humanitarian access throughout Rakhine State — as called for by the Secretary-General (Antonio Guterres) — were critical, basic steps,” he said.

He acknowledged, though, that the flow of refugees to Bangladesh was significantly reduced.

Bangladesh’s Permanent Representative Masud Bin Momen disputed that assertion saying that the flight of Rohingya fleeing to his country continued unabated and that 1,500 had come over in the first ten days of February.

The Council session was marked by sharp divisions with mainly the veto-armed China and Russia taking a more conciliatory approach to Myanmar and the Western countries and Kuwait following a hardline accusing it of ethnic cleansing, precluding any action.

US Permanent Representative Nikki Haley, who insisted on referring to Myanmar as Burma, said, “The Security Council has so far failed in its responsibility to act in response to the clear threat to international peace and security that has resulted from recent events in northern Rakhine State.”

She said the Council must hold the military accountable for its actions and pressure State Counsellor Aung San Suu Kyi to acknowledge the “horrific acts” taking place there.

She called on Guterres to appoint a special envoy for Myanmar.

There hasn’t been a pointperson on Myanmar since former Indian diplomat Vijay Nambia left the position of special adviser for that country when Ban Ki-moon completed his term in 2017 as Secretary-General.

Council President Mansour Ayyad Al-Otaibi of Kuwait also accused the Myanmar government of carrying out an ethnic cleansing of Rohingyas and said that refugees could not voluntarily return home unless confidence-buiding measures were undertaken.

Russia’s Deputy Permanent Representative Dmitry Polyanskiy, however, said that the overall situation was under control because of the efforts of the Myanmar authorities.

He said relying on subjective and contradictory versions of events was not conducive to bringing peace to Myanmar.

He said international community should acknowledge the difficulties in repatriating the refugees because of the complex situation in Rakhine state and be patient while extending support to the process.

The current crisis that sent about 700,000 refugees – most of them Rohingya Muslims – across the border to Bangladesh followed attacks on Myanmar security posts in August 2017 by the Arakan Rohingya Salvation Army (ARSA), which is led by Karachi-born Ata Ullah leading to counterattacks by the armed forces and vigilantes.

Permanent Representatives Bernard Tanoh-Boutchoue of Cote d’Ivoire and Anatolio Ndong Mba of Equatorial Guinea condemned the action of ARSA, even as they also condemned the Myanmar government for the attacks on the Rohigya.

Tanoh-Boutchoue said that he was concerned that the Islamic State and the Al Qaeda could exploit the situation.

Suan said that although there have been no major clashes during the last six months, “there is always a threat of ARSA terrorists who are taking refuge among innocent peoples” returning.