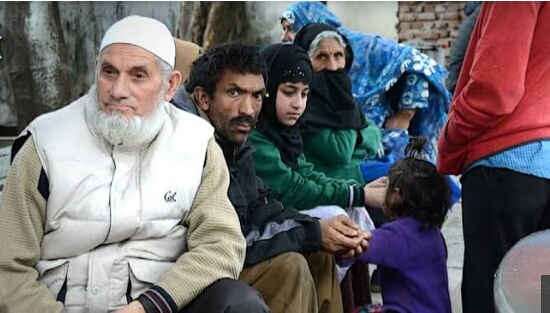 In a bid to save their lives, at least 6000 Kashmiri Muslims have taken refuge in several mosques of Jammu district in the wake of fear of attacks by Hindu mobs.

According to Kashmir Media Service, Abdul Majid, a member of Makkah Masjid Committee, Bathindi, said ‘around 2500 to 3000 people are putting up here. These include stranded Kashmir-bound passengers as well as people living in sensitive zones of Jammu district’.

Aijaz Ahmed Mir, a resident of Baramulla, who had gone to Chandigarh with his wife for medical treatment said, we reached Jammu on Sunday evening. Fearing attacks in other areas, we took refuge in Makkah Masjid, Bathindi.

Lat week, at least 44 jawans of the Central Reserve Police Force (CRPF) were killed in a dastardly terror attack in Jammu and Kashmir’s Pulwama. The well-planned attack used a vehicle-borne improvised explosive device (known as VBIED) to target a CRPF bus that was part of a 70-vehicle convoy.

The convoy was on the Srinagar-Jammu highway and was on its way to Pulwama when a suicide bomber belonging to the terrorist organisation Jaish-e-Mohammad drove an explosive-laden SUV into the bus. The SUV was carrying explosives weighing nearly 300 kgs and the bus had 39 jawans on board.

Another resident of Kashmir, Zahid Salam Wani, said I am from Budgam district and pursue my studies in Kolkata. Due to the prevailing situation, I came to Jammu by train and plan to go to Srinagar tomorrow. I will be staying here at Bathindi. The committee members including Muhammad Ashraf, Jamaat Ali and Majid Ahmed Tak asked people from all communities to come to Bathindi if they feel unsafe elsewhere.

Meanwhile, in Jamia Masjid Khatika Talab, around 1000-1500 people have taken refuge. Salman Salaria, a local resident, said we have made all arrangements here from food to bedding. The locals provided gas cylinders, ration as well as cash.

In Gujjar Nagar, around 1000-1500 people have taken refuge. Inside India, after various reports of Kashmiris including students, traders and employees were threatened to leave the place, a 42-year-old cardiologist from Srinagar, who has spent the last 22 years working in Kolkata, has been asked by the group of people to leave the city.