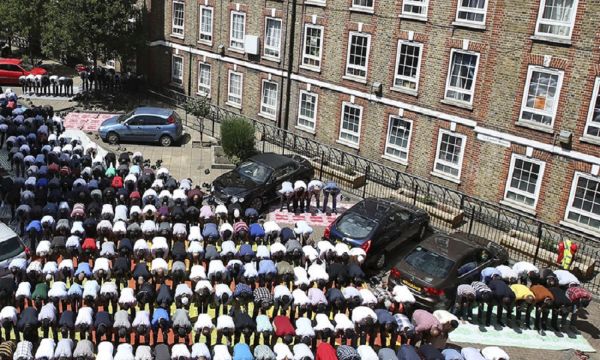 London : Nearly all British Muslims with a professional background agree that Daesh does not represent mainstream Muslim views and is not a “legitimate Islamic State,” RT reported citing a new landmark report.

The report, released by Islamic forum 5Pillars on Wednesday, found that more than 90 percent of high profile British Muslims agreed that killing civilians is unlawful, and that Islam promotes “compassion and justice for all people regardless of religion, social status, race or any other context.”

The aim of the report was to establish the tenets of normative Islam, as agreed by a number of professional and influential Muslims, including Imams, scholars, doctors, lawyers, journalists and bloggers.

Results from the survey, carried out by Peter Pickersgill on behalf of 5Pillars, showed there was a high level of agreement between British Muslims on the basic principles of Islam and the way it should be followed.

Some 97 percent of the 150 British Muslims who were surveyed agreed that Islam is the “final true religion God has revealed to mankind,” and that “God is the sole creator, uniquely One and has no partners.”

There were also high levels of agreement that Islam rejects forced marriage, forced conversion and racism.

The authors of the report hope the results will be used by politicians and the media to gain a better understanding of mainstream Muslim beliefs.

“The labeling of Muslims as ‘moderates’, ‘liberals’, ‘reformists’, ‘conservative’, ‘extremists’ and ‘Islamists’ has become the norm in Britain. Inevitably, this has resulted in division and misunderstandings within the Muslim community, as well as Britain’s non-Muslim public,” the report notes.

“The desired aim of the research is to provide an empirical reference point for the media, academics and policymakers when ascertaining what equates to ‘normative Islam,'” it adds.

Speaking in London at the report’s launch, 5pillars editor Roshan Mohammed Salih said he hoped it would become an “easy reference point for media and politicians,” adding the “government and media need to start engaging with mainstream views on Islam.”

“We believe the Muslim community is badly treated by the media and politicians” who use “catch-all terms to describe Muslims,” he said.

Deputy Editor of the website Dilly Hussain acknowledged it was “impossible” to represent the views of the three million Muslims living in Britain, but said respondents had been selected to represent professional and academic views on the religion.

Controversial cleric Shakeel Begg, who preaches at the mosque attended by Lee Rigby’s killers, attended the launch of the report. Begg told RT he hoped it would improve the image of British Muslims, saying there is “always suspicion,” but the report shows the “true image” of Islam.—SM/IINA

Harassment of Muslims, says Owaisi on UP survey of madarsas