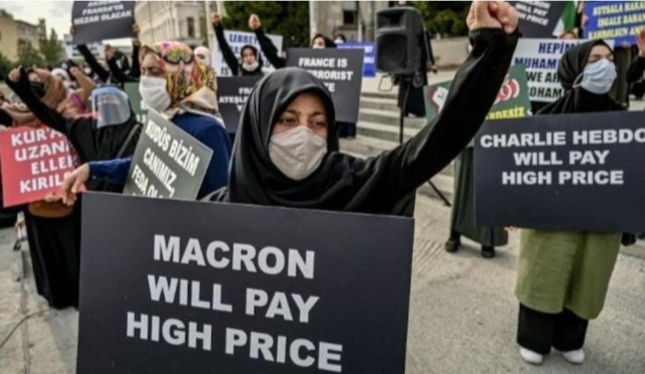 After president Macron’s support for the French teacher, who was beheaded on 16 of October, at the pretext of freedom of expression, the tensions rapidly grew across the Muslim world. Muslim nations like Palestine, Saudi Arabia, Turkey, Bangladesh, Qatar, Pakistan, and many other vehemently condemned the act of the French government and burnt the portrait of the French president and the French flag. Even in social media, we see a wave of clear anger among the peoples, as if the entire nation is on the boil. Turkey on the other hand appealed to the Muslim nations to boycott French products for the sake of Islam.

On the other hand, the divde between Turkey and France is growing rapidly, and if left unchecked, it may take a serious turn. On the French side, they view the act of the French teacher who depicted the picture of Prophet Mohammad, as freedom of expression as they also support the publication of cartoons in Charlie Hebdo. The question, which is very essential at this moment of uncertainty, is, what we Muslims should do in such a situation?

Charlie Hebdo and the Controversy
The French weekly magazine Charlie Hebdo is one of the most controversial magazines and also according to some officials, one of the major causes of the terrorist attacks in France. The magazine presents itself as anti-racist, skeptic, and secular. It had been in the spotlight since its initial days of publication in the 1970s for its political and religious views. The magazine had also been banned several times for publishing highly controversial stuff. Initially it was a failed publication. In fact courting a controversy has been its marketing strategy. After getting not much response from the public, the magazine came up with a different marketing arrangement. In 2006 the magazine published, for the first time, cartoons depicting Prophet Mohammad. We need to remember that the copies of the magazine in demand that week were over a thousand. However, the demand soared dramatically and the magazine had to print 150,000 copies the next day.  The reaction of the Muslims at that time was not so aggressive because the magazine had a tiny number of readers. But now with its growing clamor it was bothering the Muslim community of France. Again in 2012, the newspaper for lighting a spark among the Muslims published a series of satirical cartoons of the Prophet. The same thing was repeated about a month ago in September 2020. But this time the magazine had to face opposition on a larger scale as it became the official standpoint of the French government with Macron’s personal support.

The offices of Charlie Hebdo were attacked three times in recent years. The attack in 2015 lead by two gunmen killed over 10 peoples including many cartoonists and the director. And on September 26, a school teacher Samuel Paty was killed by his student for representing the Prophet’s Cartoons. The tensions are continuously growing, making the life of French citizens worse. Many European countries are supporting France. It seems as if we are on the verge of a new crusade.

Can we prevent violence and bloodshed?
These cartoons and mischievous comments can evidently blaze anger and create a sense of insecurity within the Muslim community of France.
The religion of Islam is a religion of peace and harmony. Then why we Muslims cross the limits of humanity in the name of Islam. If we don’t believe in people who tell us that idols and statues represent God or embody Godhead why do we get provoked by funny images that have nothing to do with the holy prophet? For we know for sure that no authentic image of the prophet exists anywhere in the world. Then what is the logic of considering the cartoons as the picture of our Prophet? Islam teaches us that there is only one God and he cannot be compared with anyone or anything. And so were His prophets. And if we move a bit further in this debate, we find that there are three Abrahamic religions; Judaism, Christianity and Islam. By reading the Bible and other ecclesiastical material of Christianity, we can find many pictures, drawings, and paintings of prophets from Adam to Jesus. And there are some pictures which can be offensive if viewed from irrational perspectives. And the most focusing thing is Jesus on the cross himself. Is he not one of our beloved prophets? Do we then need to fight on these highly un-Islamic depictions? The key point is belief. If you don’t believe that the story of the crucifixion is right. Never mind, move on. And if don’t believe the Charlie Hebdo cartoons as caricatures, which in my opinion is not, nor it carries any artistic value, even spoken from an art angle, then why this fuss?

Not only the Muslims, but the rest of the world should also have to understand the scenario behind these acts of the French government. According to some researchers, the current French government is doing all this just for the coming elections. And by publishing such articles and cartoons, their major interest is to attract the attention of the public. And as some officials think, the current French government can repeat the same strategy in the future for gaining support. The only thing which we must learn is to how to tackle these types of issues rationally. The policies of the French government as they consider their government secular are way away from it. They are just using human sentiments for their political gains. Can we Muslims stand morally tall and politically wiser than Mr. Macron?

Cartoon controversy : Muslims need to realize that we are moving away from real Islam