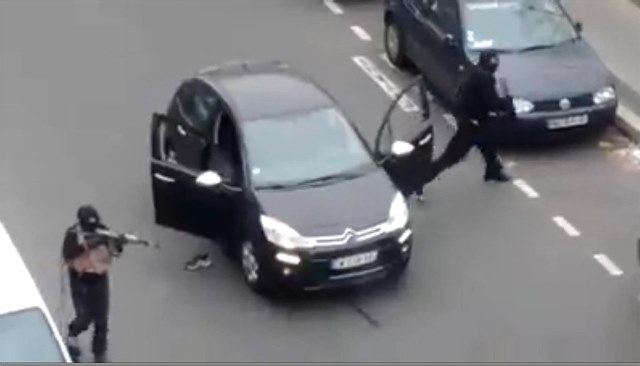 ‘Attack on priest in France’ shouts the popular female news anchor with angry eyebrows and a well powdered face which now seems like a halfhearted attempt to conceal true hidden agendas. I used to be furious about her journalistic ethics but today I don’t feel like she has any hidden agenda like they had a few months ago when an Islamic missionary group was made the target for an entire country for allegedly having spread the corona virus. The news anchor today is simply doing her job. The truth is that a priest was attacked in France. The truth is that there have been two more attacks in two different French cities in the past few days. The truth is that the common element of all these attacks was a Muslim culprit.

I read a while back ago that there shall come a time when holding on to your faith will be as difficult as placing a hot burning coal on the tip of your tongue. I feel the exact same way right now.

It seems like an endless cycle now. I condemn killings and defend true Islam and then more killings happen . I have never felt so helpless and cornered in my life. People attacking my faith and calling my Holy Book a terror manual seems to be an everyday phenomenon. I have been quite for so long but not anymore. The change has to begin from within. Someone has to speak up about everything wrong within our community. Nothing justifies killing anyone.

I shall help my community realize all the flaws that we have intentionally overlooked since long time.

For today I shall tackle the issues surrounding the French killings in the name of our beloved Prophet.

The French have had a long history of publishing satirical material. It ranges from politics to culture to gender and it doesn’t spare religion.

The name was Maurice Sinet. He was also a cartoonist who was employed in now well recognised controversial satirical publication Charlie Hebdo. Interesting fact is that Maurice Sinet was fired from his position in Charlie Hebdo for having strong anti Semitic ( insulting views about the Jewish community and their history) and I believe it was the correct thing to do. French have also had a history of shutting down publications that made fun of their own wartime heroes and popular figures. The natural question that comes to mind is that does it have to be only and only Muslims and their religious beliefs and sentiments that have to take the bullet so that French secularism and freedom of expression survives? Why such double standards monsieur?

But this article would simply be a noisy childish complaint if it isn’t accompanied by some amount of introspection too.

My nani used to tell me stories about our beloved Prophet( PBUH )every night that we stayed at her during our summer vacations in Gorakhpur. One such story was, and I’m sure most of the readers are familiar with it, how a wicked old lady used to throw trash from atop her roof in Medina whenever our beloved Prophet used to pass through the street below. She was a consistent old woman until one day she didn’t throw the trash which came as a surprise for our beloved Prophet who went inside the old lady’s home to enquire about the lapse in daily routine of the old lady. She was sick so the Prophet (PBUH) took notice of her and assured her of his help if she ever required any. Such was the character of our Prophet. So the natural question is would the Prophet have behaved or reacted in the way as few Muslim react which resulted in death of few person? Prophet was the most humble and noble man to have walked on this planet. Prophet would have never advocated this. I repeat. Never.

Let’s talk about the solution to this problem.

It’s easy then, isn’t it? Just brush off the whole problem claiming that the perpetrators were not ‘real Muslims’ and that Islam means peace.

Those who live in reality surely know that we have become laughing stock now. We are called ‘peaceful’ in sarcastic tones.

My favorite athlete, a Dagestan Russian mixed martial artist, Khabib Nurmagomedov said something which unfortunately never crossed the most enlightened minds of our community. He says, ‘ People don’t read the Quran. They read you. So be a good Ambassador of Islam’.

I strongly believe that if we were making decisions on behalf of French authorities, we wouldn’t have acted any differently.

Muslims need to realize that we are moving away from real Islam. We have to read the Quran and its correct unbiased translation (yes, there are politically driven patriarchal translations of Quran). Quran advocates justice and equality in all realms of life. Hate mongers will keep cherry picking verses from Quran that seem problematic prima facie but in reality are perfect when put in correct context. We have to be very cautious while selecting the translation of Quran that we read. Many translations are decades old and misinterpret many verses and show them in bad taste.  Also we need to be extremely cautious while referring to Hadith. Many Hadiths have often been source of controversial subjects that have never been mentioned in the Quran.

I strongly condemn the killings in the name of our Prophet. Did anything good happen with that? No. Instead millions of European Muslims’ are now living in fear. Already two Arab sisters have been stabbed under the most iconic French monument, the Eiffel tower, and I see no irony in it. Seems symbolic that maybe the French don’t want Muslims in their country now. Muslims need to realise that active provocation of the Muslims will be a norm in this new world. Our patience will be tested time and again but we should never lose temper. Allah has promised immense rewards for those who practice patience in this world as well as in Hereafter.

Immense amount of work also needs to be done for education and employment of Muslims. There is abundant data that indicates that these two factors can help curb such un-Islamic and moronic behavior. And it’s shouldn’t be sans women. Education and employment is a must for Muslim women too if we wish to see us empowered and financially stable in the future.

There are a number of related issues and questions such  as;

1) Why are so many Muslims fleeing to western world but refusing to adapt in that environment?’

2) Why has Muslim world leaders been so pathetic to tackle the fact that the Chinese are running concentration camps of Muslims in West China?

The French Crusade: Time to see beyond Charlie Hebdo