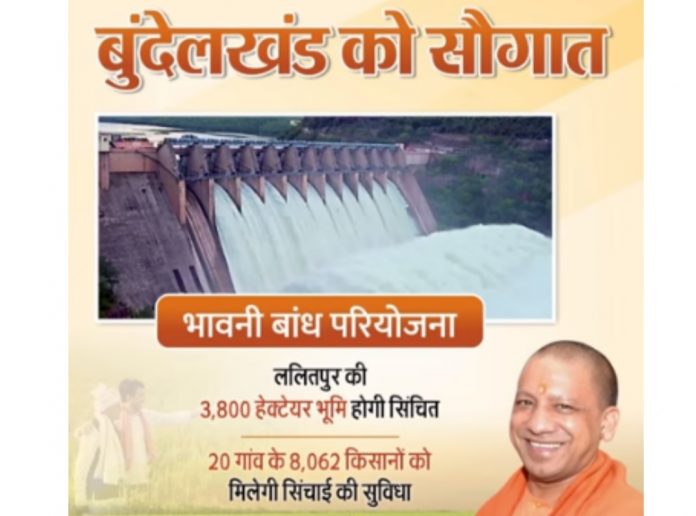 UP is these days into experimenting and getting into a novel experience, which is shameful to the hilt, to co-opt feats of other governments ‘as it own’ and stomping it full throttle. The latest has come in the wake of an advertisement in which UP BJP CM Ajay Singh Bisht is shown smiling, bestowing a gift, to the people of Bundelkhand, with a Bhawni Dam Project, for which 3800 hector of land would get water-irrigation, covering 20 villages and set to benefit 8,062 farmers! The government shows extreme accuracy, as if to reach to the last farmer (sic) whereas the ground situation is far away from any reality.

Bundelkhand is one of the most backward regions in UP where people are worst hit due to incessant droughts, over the years and with no rains etc. It is also by far the most underdeveloped region where state-infrastructure apart from other facilities like health/education has been well below the standard, but to spank it with such blatant falsehood, that too when India’s PM Narendra Modi along with AS Bisht were to visit Mahoba on November 19, has surely turned BJP from saffron to red. In also a mad rush to run accolades the BJP MLA Dr Avadhesh Singh lauded AS Bisht on his twitter to be followed by many BJP leaders such as ‘MLA Bamba Lal Diwakar from Unnao, Ravindra Nath Tripathi, and BJP MLA from Bihar Anil Kumar’. Yes, the race could be accessed from Bihar too, informed an article from The Quint .

The BJP AS Bisht government, has perhaps, no other achievement of its last five-years, therefore has been forced to feature milestones from other states as theirs, but in an age of internet and social-media, this new hoax eventually had to get exposed, only if BJP government cares-a-damn. This proverbial paradise of earth picture, in this advertisement, has yet again proved that this BJP government stands only on advertisements, even if that be at the cost of others!

It has been proved that this advertisement is nothing but utter falsehood as the image had been picked-up from a Sri Sailam Dam from Telagana-Andhra Pradesh border! This falsehood, has been dished-out to UPites, within months when UP BJP government had planned to transform UP from West Bengal, as it had used a picture of a flyover from West Bengal as one of its biggest achievements, on September 12. Perhaps, plagiarism is the official dictum in UP now! Imagine the shock-and-awe BJP government has given to the people specially from Bundelkhand who have been taken-to-a-fancy world bereft of any reality, as the dreams-sold-out have come crashing down. SP Party Chief Akhilesh Yadav, too has been questioning BJP, which is on an inauguration-spree, as to find out who started those ‘ExpressWays’, inaugurated by BJP! If not the SP government. There have been even attempts by BJP to show Lucknow Metro Train as their forte as well.

There seem to be a false pretense within BJP, since BJP PM Narandra Modi withdrew the three-black agricultural laws, that BJP would be welcomed with-open-arms, but everything contrary to the expectations is going on, the latest to add to it, has been the visit to BJP National President JP Nadda to Kanpur, and there was nothing but vacant seats on November 23. What became more of a ridicule was that while JP Nadda addressed and BJP CM AS Bisht was also present, there was almost none sitting on the seats. The winds of sweeping change are now on the onset in UP, as Kanpur has 11 BJP MLAs, including Kanpur Dehat and even a BJP MP, yet even a dismal crowd was missing.

People at large are now averse to BJP as issued bogging down general populace are so many in numbers that the paeans from BJP podiums is now more honey to the ears. The moment people in Kapur got a whiff that BJP top ledership would be in the city, people thronged the venue with ‘Yogi-Modi hosh mein aao’ ( Yodi-Modi come to your senses) slogans until they were to be cordoned-off by the state police. The desperation amongst people has reached its nadir as there is general joblessness and unemployment with virtually no job-security, apart from what the dread UP was put into when COVID-19 second wave waged through, April 2020 hence, while the general public languished for Oxygen with thousands of dead-bodies lying across streets and river-beds. What to talk of the price-rise on practically everything under the sun. BJP therefore had to be back to its Ram Temple rhetoric while no one listened. The absence on the seats, is sure to have put the alarm bells ringing in Delhi!

Despite, the anti-farmers laws set to the withdrawn, the BJP stand on it was to brand the protestors as Khalistanis, terrorists, Pakistanis, to go to Pakistan, and it is to everyone’s measure that the most pivotal role played into opposing the anti-farmers laws, found Sikh farmers, to be on the forefront, therefore, JP Nadda found it ‘forced’ to represent at Namdev Gurudrawa in Kanpur, so as to placate the Sikhs!

Will the Sikhs forget the slurs they have been through? From BJP ultimate leadership including PM Modi, who called the protestors as ‘Andolan Jeevi’ ( parasite protestors), and now has been forced to step-down on the three-black-laws, yet there are conflicting signals, being forwarded that new-laws, would soon be in force, once after the five-state-elections are over. It has been learnt that Satyapal Malik, the BJP Governor of Meghalaya, who has been permanently acting as a midwife to kill the farmers protest, as a time-tested pressure valve tactics, has apprehended that a general revolt in army was brewing, as children of these farmers, are those who serve the Indian Army. But, the big question is how come BJP, drenched with its ‘Corporate Agenda’ made a sell-out of farmers in favour of the Ambani-Adani duo with so ease? Farmers have refused to bow their protest and have vouched to stave-off BJP from the ruling chair, in UP in 2022 and later in 2024 at the Center.

Meanwhile, Rashtriya Lok Dal Jayant Chaudhry, from the heartland of farmers has agreed to strategize with SP Chief Akhilesh Yadav, towards UP elections 2022 and it is no wonder that BJP would be ousted, as an anti-BJP sentiment is what fills the air.

Why Mayawati will not become Chief Minister of Uttar Pradesh