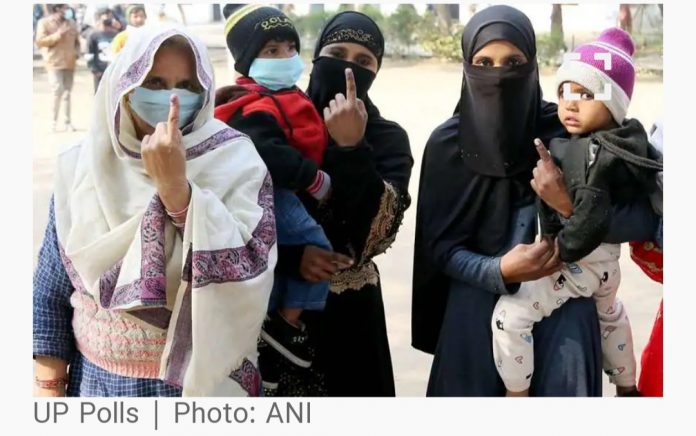 Azamgarh:  The Uttar Pradesh assembly election is nearing its conclusion – the last round of polling to be held on March 7 –  heralding a wind of change albeit a large section of media has relentlessly been engaged in blurring the writing on the wall drumbeating the “undefeatable image” of Modi-Yogi combined by flashing abstract issues. The change is not only seen in western parts of the state where peasants unrest and strays hold the key, it is evident in eastern parts also, including chief minister Yogi Adityanath’s turf.

Initially, the BJP wanted to inject a mix of “development-oriented rhetoric with heavy doses of Hindutva” – as seen in 2017 assembly elections – but it didn’t work this time. PM Modi unveiled a number of developmental projects such as Noida International Airport at Jewar, Purvanchal Expressway –  which connects UP’s 9 districts – and Kashi Vishwanath Corridor etc, but these inaugurations and announcements failed to address people’s anger and resentment on unemployment, stray animals, Covid mismanagement, poor law and order. With the Hindutva sheen fading due to “oft-repeated anti-Muslimism” coupled with assertion of Thakur identity under the current dispensation, the other caste groups seemingly have come together to give a befitting reply to the saffron-clad CM.

The barrier between political differences appears to be blurring this time. When the BJP swept Western UP in the 2017 election, it failed to repeat the feat here. The region is relatively more politically aware than in the western parts. While Muslims, the state’s second largest demographic, have a crucial influence in dozens of assembly seats, the eastern part is a cluster of backward and most backward sections of the population. They are also experiencing pangs of backwardness.

When this correspondent talked to an array of Muslim voters, they all have grouse about the neglect from the successive state governments. The region is known for carpet-making and other handicrafts units which had badly been hit during the coronavirus-induced lockdown. Muslims in the region are the most neglected lot and their deprivation level in every sphere of life is the highest. However, their main concern is right now peace and security. Feeling of insecurity is high among them.

Khurshid Ahmad, a resident of Azamgarh, said security is an overriding issue as the state has virtually been turned into a police state. Fake encounters and other police brutalities have become normal, he added. “We only want nothing but peace and security, and for this we will exercise our voting right”.  Ihasan Khan, an elderly voter, said he never saw such a government in his entire life which openly follows a discriminatory attitude towards other religious followers and backward castes.

To cash in on these feelings, AIMIM, led by Hyderabad parliamentarian Asaduddin Owaisi, made forays into the political arena.  Some Muslim voters have shown sympathy towards the MIM but they are also wary of it.

“Samajwadi Party must be cautious because Owaisi advocates the politics of representation. He has acquired a lot of traction among young Muslims by accusing so-called secular parties of not encouraging Muslim leadership,” said Ameeruddin who was once associated with Peace Party, a local party. Akhilesh is relying on the idea that Owaisi is a “vote katwa” who is just interested in helping the BJP.

“We have no option but to go with a party or alliance which is in a position to overthrow Yogi’s government,” Adeeb Sultan said in Mau. Such a feeling is common in the region where SP and BSP both have considerable influences. If Muslims vote in unison, they can swing the fate of many candidates.

Azamgarh, Mau, Jaunpur, Ghazipur, and Chandoli are among the nine districts of Uttar Pradesh’s Purvanchal region going to polls in the 7th phase. Varanasi, Mirzapur, Bhadohi, and Sonbhadra are among the 54 Vidhan Sabha constituencies that will vote.

Battle for UP: Owaisi brings hijab row to UP polls

“I am not hurt to do Rajput politics”: Yogi Adityanath