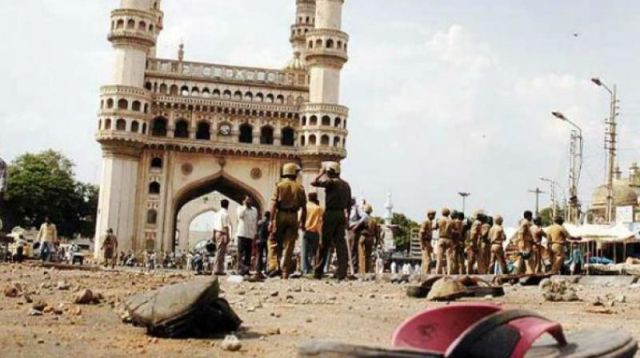 Hyderabad : Police sounded an alert in Hyderabad following the judgement of a NIA court acquitting all five accused in the 2007 Makkah Masjid blast case.

Police beefed up the security in the communally sensitive old city. More than 3,000 policemen and personnel of paramilitary forces were deployed as part of the security arrangements.

Senior police officials were monitoring the security arrangements at the historic mosque located near the iconic Charminar.

Deputy Commissioner of Police V. Satyanarayana said the police had taken all necessary measures to prevent any untoward incident.

The NIA court acquitted all five members of right-wing Hindu group Abhhinav Bharat as the prosecution failed to prove charges against them.

Eleven years after the powerful explosion killed nine people and injured more than 50 during the Friday prayers near the iconic Charminar here, the court held that none of the charges framed against the accused were proved.

A lawyer for one of the accused told reporters outside the Nampally criminal court complex here that the court held that the prosecution failed to prove the charges.

Nine people were killed and 58 others were injured when the explosion ripped through the mosque during Friday prayers on May 18, 2007. Two live IEDs were also recovered by police and defused.

Later, five more people were killed in subsequent police firing on the crowd outside the mosque.

Immediately after the blast, police had blamed Harkatul Jihad Islami and rounded up about 100 youths from different parts of the city. Several were arrested and jailed. The CBI later revealed that the blast was the handiwork of right-wing Hindu group.