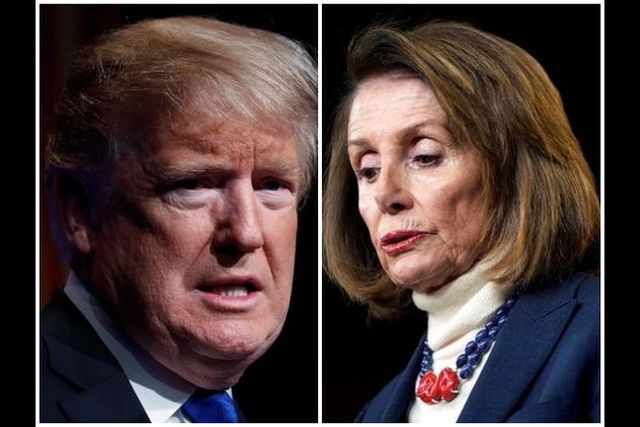 Washington : US President Donald Trump has barred Speaker Nancy Pelosi from flying on a Pentagon plane to Afghanistan in a tit-for-tat for her blocking his State of the Union Address as a new act unfolded in the farcical drama of egos playing on the sidelines of the government shutdown paralysing all but vital operations.

Mirroring her reasons for cancelling Trump’s ceremonial speech to Congress, the President wrote to Pelosi on Thursday that “due to the shutdown, I am sorry to inform you that your trip to Brussels, Egypt and Afghanistan has been postponed”.

“We will reschedule this seven-day excursion when the shutdown is over,” he added.

On Wednesday, Pelosi had written to the President that he could not deliver the address because security cannot be assured due to the shutdown.

Trump has announced he was cutting the number of US troops by half to 7,000 in Afghanistan while its government is battling the Taliban and other terrorist organisations, some backed by Pakistan.

Even Republican leaders criticised Trump’s response to Pelosi. “One sophomoric response does not deserve another,” Senator Lindsey Graham said, while fellow Republican Senator John Cornyn remarked that there was too much “childishness” in the Trump-Pelosi fight.

Trump ordered the flight cancelled just as Pelosi was preparing to fly out to visit American troops in Afghanistan on a mission that had been kept secret for security reasons.

Buses were even waiting outside the Capitol with some members of her entourage already on board to take them to a military base for the flight when cancellation was announced.

Trump sarcastically suggested that she could fly to the war zone on commercial planes.

Pelosi’s spokesperson Drew Hamill said that the stop in Brussels that Trump mentioned was to give the pilot a break and while there she had planned to meet NATO leaders. The trip was to “express appreciation and thanks” to the troops in Afghanistan and to get security and intelligence briefings, he added.

He said that Egypt was not on Pelosi’s itinerary contrary to Trump’s claim.

Trump’s wife Melania, meanwhile, reportedly took a military Boeing jet to Palm Beach, Florida, where he has the Mar-a-Laga resort. The White House would not confirm the trip or disclose its purpose.

Trump and his officials were reportedly working on alternatives to the cancelled State of the Union Address scheduled for January 29.

Republican Representative Mark Meadows said that Trump was planning to deliver the address outside the House chamber, heightening the drama.

Amid the political theatrics, the shutdown entered its 28th day on Friday with no signs of a compromise to end the crisis.

Trump is standing firm on his demand for $5.6 billion to be included in the budget for building a wall along the Mexican border, while Pelosi, Senate Minority Leader Chuck Schumer and most Democrats are equally uncompromising that they won’t give in.

During his campaign, Trump had made the wall to deter illegal immigrants and smugglers a key electoral promise.

As a result of the standoff, there is no federal budget to fund government operations leading to the shutdown affecting about 800,000 employees.

None of them, including those in essential services like security, aviation and tax collection who continue to work, have been paid since January 11.

Their tales of economic distress are beginning to pour out and Democrats hope a groundswell of sympathy would pressure Trump to compromise.