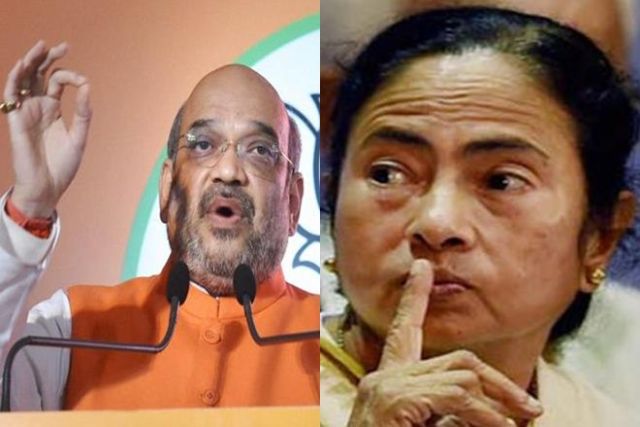 Kolkata : Dismissing BJP President Amit Shah as an “empty vessel that sounds much”, West Bengal’s ruling Trinamool Congress on Thursday called him a “rioteer” and said the people would give him a “befitting reply” for trying to foment lawlessness in the state and making wild allegations against Chief Minister Mamata Banerjee.

“He is an empty vessel that sounds much. He is being fed wrong information about Bengal’s politics, and he is indulging in big talk. All his enthusiasm will come to an end after the 2019 general elections,” Trinamool Secretary General Partha Chatterjee told reporters here.

Chatterjee was responding to Shah’s all out attack on the Trinamool from a public meeting in Purulia, where he claimed the BJP will win 22 of the 42 Lok Sabha seats in Bengal in next year’s general election.

Shah ridiculed Baneree’s efforts to cobble up an anti-BJP alliance ahead of the general elections, and advised her to first concentrate on Bengal, as ground was slipping from under her feet.

He also lambasted the Trinamool government for committing atrocities on BJP activists, failure to curb infiltration, cross border smuggling of drugs, rise of ‘Syndicate raj’ in Bengal and the violence during the Panchayat polls.

Countering Shah, Chatterjee said: “First they should take care of Delhi and Gujarat and then think about Bengal”.

“The language they are using to woo people, that will have nil effect on the public. In Bengal, you cannot divide the state on the basis of religion or race,” he said.

Going a step further, state Finance Minister Amit Mitra called BJP a “terrorist type of organisation”, and accused it of establishing a “neo-emergency” in various parts of the state.

“He is a rioter leader. He has taken part in a riots,” he said.

“What he has said is very shameful. He has compared between Rabindra Sangeet played out at traffic signals in the state and bombs. What is he trying to say? Does he want to say Mamata Banerjee is throwing bombs?” he asked.

“The way Amit Shah is trying to foment lawlessness in Bengal, people will respond in 2019. BJP will be thrown out of power at the centre,” said Urban Development minister Firhad Hakim.