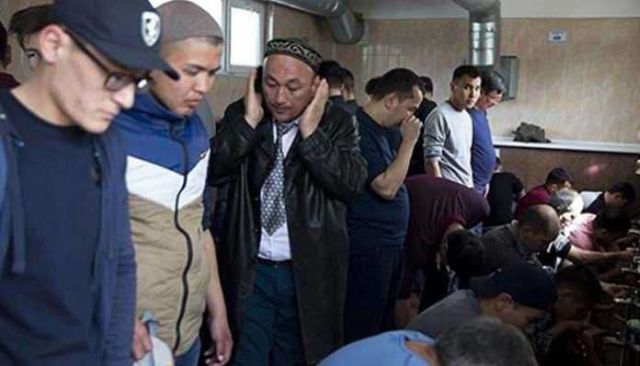 Beijing : Amnesty International (AI) in a report on Monday urged the Chinese government to end the “brainwashing” of nearly one million Muslims held in “re-education” camps in the Xinjiang Uighur region.

In the past year, the government has intensified its campaign of mass internment, intrusive surveillance, political indoctrination and forced cultural assimilation against the region’s Uighurs, Kazakhs and other predominantly Muslim ethnic groups, according to the report.

The campaign prohibits any display of religious and cultural affiliation, including growing an “abnormal” beard, wearing a veil or head scarf, regular prayer, fasting or avoidance of alcohol, or possessing books or articles about Islam or Uighur culture as Chinese authorities consider them “extremist” behaviour, reports Efe news.

It is estimated that currently nearly one million Muslims are being held by the authorities in re-education camps, without the right to trial, access to lawyers or contact with family members, the report said.

“The mass detention camps are places of brainwashing, torture and punishment. A simple act of messaging your family abroad can get you detained highlights how ludicrous, unjustified and completely arbitrary the Chinese authorities’ actions are,” said Nicholas Bequelin, Amnesty International’s East Asia Director.

The Chinese government justifies these measures as part of its counter-extremism and counter-terrorism efforts and only releases an individual who “has been transformed”.

Those who resist or fail to show sufficient progress could face punishments ranging from verbal abuse to food deprivation, solitary confinement or beatings.

“There have been reports of deaths inside the facilities, including suicides of those unable to bear the mistreatment,” the human rights organisation said, based on its interviews with former detainees.

Among them was Kairat Samarkan, who was sent to a detention camp in October 2017 after travelling to Kazakhstan and later released in February 2018. The Chinese authority accused him of “betraying his country”.

According to AI, Samarkan was hooded, made to wear shackles on his arms and legs and forced to stand in a fixed position for 12 hours.

There were almost 6,000 people held in the same camp as Samarkan, where they were forced to sing political songs such as “Long live Xi Jinping” and study speeches of the Chinese Communist Party, Samarkan recounted.

Travel abroad for work or education, particularly to majority Muslim countries, or contact with people outside China are also major reasons for suspicion, according to AI.

“Families have suffered enough. Hundreds of thousands of families have been torn apart by this massive crackdown. They are desperate to know what has happened to their loved ones and it is time the Chinese authorities give them answers,” said Bequelin.

AI called on the government of President Xi Jinping to put an end to this campaign of “systematic repression” against Muslims, a call raised on numerous occasions by many international organisations.

It is estimated that in China there are some 23 million Muslims or approximately 1.7 per cent of the population, among which are ethnic minorities such as Hui or others whose origins are linked to Uighur, Kazakh, Uzbek, Kyrgyz or Tajik people in Central Asia.