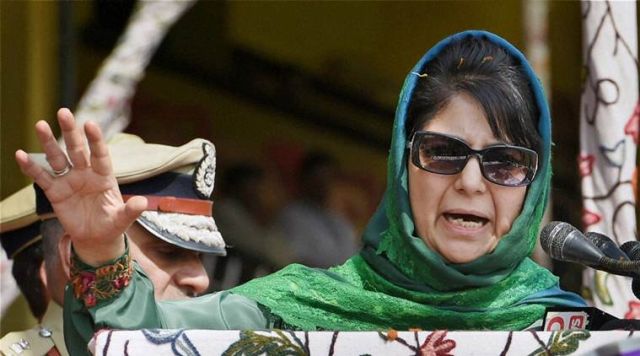 New Delhi : Former Jammu and Kashmir Chief Minister Mehbooba Mufti has warned that any attempt by the BJP to engineer defections in her PDP to form the government in the state “will erode the trust of the Kashmiris in Indian democracy”.

“If Delhi intervenes and breaks our party, and makes Sajad Lone or whosoever as the Chief Minister, it will erode the trust of the Kashmiris in Indian democracy. Any intervention from Delhi will be taken seriously,” the Peoples Democratic Party (PDP) chief said in an interview to India TV.

However, BJP General Secretary Ram Madhav ruled out any possibility of stitching an alliance with a group of disgruntled PDP legislators to form the government in Jammu and Kashmir which is under Governor’s Rule since June 19.

“We are for continuing with Governor’s Rule in the interest of peace, governance and development in the state,” Madhav tweeted.

Madhav’s remarks came amid speculation that the BJP and its partner, former secessionist Sajad Lone’s Peoples Conference, were engineering a political coup in the PDP and get support of its rebel MLAs.

At least five rebel PDP lawmakers in the state have openly spoken against their party President Mehbooba Mufti.

Speculation of a new political alignment has been flying thick and fast in the state since the BJP pulled out of the alliance with the PDP, pushing the state into another term of the Governor’s Rule.

Mathematical arrangements in the 87-member Jammu and Kashmir Assembly are stacked in no party’s favour.

In the House, which has been kept under suspended animation, the PDP has 28 MLAs. The BJP has 25 seats and enjoys support of two legislators from Sajad Lone-led Peoples Conference and one legislator from Ladakh.

For any party to stake claim to form a government, it would require support of 44 lawmakers.

In her interview, Mehbooba Mufti refuted reports about her party trying to forge an alliance with the Congress, describing them as “baseless”.

“Why would I resign if had it been so? When our government (with the BJP) fell, the Governor asked me whether I would like to explore other alternatives, and I told him that I will send my resignation within an hour.

Asked about Prime Minister Narendra Modi’s peace overtures to Pakistan and Pakistan responding with attacks in Pathankot and Uri, Mehbooba Mufti replied: “I do not say that Modiji didn’t try, but there has to be consistency. We invited Modiji to Srinagar, where he addressed a big public meeting.”

“The people of the valley had great expectations, but they went home disappointed.”

Reminded about Modi claiming to have a 56-inch chest to face challenges, Mehbooba Mufti said: “He will have to give at least one inch from his 56-inch chest for the people of Jammu and Kashmir. The idea of India is incomplete without the idea of Kashmir.”

She claimed that there was 70 per cent improvement in the situation in the valley when unilateral ceasefire was enforced during Ramadan this year.

“People heaved a sigh of relief. This ceasefire was not meant for militants, it was meant for the common man. By discontinuing the ceasefire, we did what the militants really wanted.”

She said for the first time during the ceasefire, Home Minister Rajnath Singh came to the valley and no strike call was given.

Describing the period from 2002 to 2005 as “a period of magic moment”, the former Chief Minister said: “At that time, Atal Bihari Vajpayee was the Prime Minister in Delhi and my father Mufti Sahib was the Chief Minister, and both were working in close tandem.

“The people of valley still remember those days.”